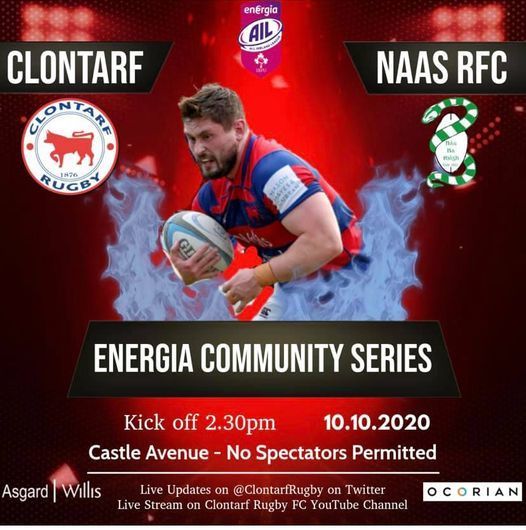 Naas travelled to Clontarf last Saturday for their latest Energia Leinster Community Series game, knowing that an immense challenge awaited them. A brief look at Clontarf’s recent record in the All-Ireland League emphasizes this fact, as the Dublin side were crowned champions of Ireland in both 2014 and 2016, in addition to finishing runners-up in 2013 and 2017. However Naas competed admirably and if anything the final score line here was harsh on them, as in almost every facet of play they were on a level terms with their esteemed opponents, the one difference being the power of the home sides scrum and driving maul which Naas struggled to contain.

On a dry afternoon Clontarf started with a strong breeze at their backs, but it was Naas who put together the first meaningful attack. Following a good line-out win by David Benn the visitors attacked the Clontarf line with purpose, forcing the home side to scramble in defense, but after many phases of attacks Naas were penalised for holding on at a ruck allowing their opponents to clear their lines with the resulted penalty.

Clontarf were to show their class with no less than three tries in a five minute spell after this. The first one came on 13 minutes when after a decent spell of possession they were awarded a penalty on the Naas 22. Angus Lloyd who has made appearances for Ulster, Connacht and Munster quickly tapped and went himself, taking play right up to the Naas line, and when he was stopped the ball was quickly recycled to Cormac Daly who dived over to score.

Two minutes later Clontarf disrupted a Naas line-out, they then quickly transferred the ball to midfield out to Matt D’Arcy who broke a couple of tackles to score under the posts. Then for the second week running Naas conceded straight from a kick-off. Michael Noone broke free from a maul following the restart here, he passed to Angus Lloyd and the scrum-half sprinted down the right wing to score in the corner, narrowly evading a couple of despairing Naas tackles. With Conor Kelly converting one of these tries, Clontarf were 17 points to the good after 18 minutes.

To their credit Naas rolled up their sleeves and responded with a fine try on 22 minutes. The Clontarf lock Fionn Gilbert received a yellow card for a high tackle and the subsequent penalty was dispatched to touch by Craig Ronaldson. From the line-out scrum-half Tim Murphy passed to Gary Kavanagh who had run a marvelous line which sliced open the Clontarf defense, and led to him scoring under the posts. Ronaldson added the conversion and Naas had reduced the margin to 17-7.

However the power of the Clontarf pack was beginning to tell and led to them scoring another two tries before the half-time whistle. On 31 minutes their pack drove Naas right back at a scrum, winning a penalty which they declined to have a shot at goal with and kicked to touch. From the line-out they set up a driving maul which led to Dylan Donnellan diving over for a try. Their next try which came in first-half injury-time was an absolute replica. Penalty, line-out, driving-maul and Donnellan scoring. Although Conor Kelly was unable to convert either of them the home side led 27-7 at the interval.

Sometimes you need a bit of luck on your side in games and Naas certainly did not have it here, as during the break the strong wind that Clontarf had the advantage of in the first half completely died down. However this did not deter Naas and they more than matched their rivals in the second half. They took the game to Clontarf at every available opportunity and can rate themselves unlucky that some of their fine play did not result in points. Unfortunately for them there was to be only one score in the second period, and that fell to the hosts after 69 minutes, when after a fine break by Michael Courtney he passed to Matt D’Arcy who finished the move in style. Conor Kelly added the extras leaving the final score 34-7 in favour of Clontarf.

Athough a comprehensive defeat was suffered here by Naas, this will be a good learning curve for this young side. They also took the opportunity to blood a few new players and being exposed to this level of rugby can only improve them going forward. Next up for Naas is a home fixture against St. Mary’s College, which is on next Saturday afternoon with a 2.30pm kick-off.

A note to advise on the death of Arthur Phelan former pla...