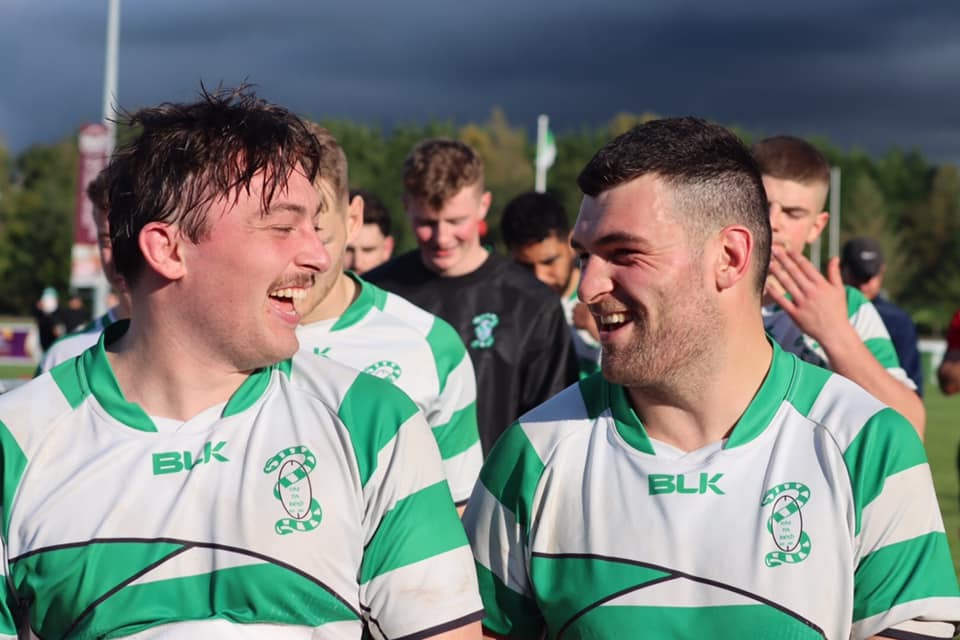 Beaten by Old Belvedere eight days earlier, Naas took their hurt of their defeat out on Malone last Saturday afternoon, as they clinically dismantled their Northern opponents and had the game effectively over as a contest by half-time.

This match was played on a glorious Autumn afternoon, and the large crowd in attendance at Forenaughts saw some sparking rugby played by Naas which the visitors had no answer to. However it was Malone who scored first when Rory Campbell was successful with a penalty after two minutes which was awarded for a high tackle. That was to be the only time in the match the Northern men led, indeed by the time they scored again Naas had racked up no less than 31 points.

By the eighth minute Naas were level. Malone were penalised for dropping a scrum and from 35 yards out Peter Osborne made no mistake with his kick. Straight from the kick-off Naas struck again. A long clearance kick by Osborne was not dealt with by Aaron Sexton, and Bryan Croke gleefully latched on to the loose ball and sprinted clear to score. The resulting conversion by Osborne put Naas 10-3 in front.

Malone did have two good chances to get the next score. On 20 minutes after a fine midfield break by Aaron Sexton his crossfield kick was gathered by David McMaster. However just as he was touching down in the corner, a brilliant last gasp tackle by Gary Kavanagh forced a foot into touch and the score was ruled out. Then with the line at his mercy Shane Kelly knocked on just as he was about to pick up the ball from the base of ruck and dive over.

The visitors were made to pay for not taking these chances as on 26 minutes Naas increased their lead. A great charge up the field by Ryan Casey took play to the half-way line, the ball was then quickly recycled and passed to out-half Bryan Croke. He put in a crossfield kick which was gathered by Donal Conroy whose inside pass was taken by Peter Osborne who galloped clear to score. The latter converted to make it 17-3 to the home side. Malone were still reeling from conceding that score when they went further behind within four minutes. They attempted to run a ball from their own 22 but a pass from Gareth Millar was gratefully intercepted by Bryan Croke who ran in to score unopposed. Another successful conversion by Osborne stretched the lead to 24-3, which was to be the half-time score.

A great first-half for Naas and it was to get better within two minutes of the restart when they produced the score of the game. Lovely handling and running lines by the backs took play into the Malone 22, where Craig Ronaldson slipped the ball into Peter Osborne, who sliced through the defence to score under the posts. This secured the try bonus point for Naas and with the latter converting the lead was out to 31-3.

The momentum of the game changed after 51 minutes, when Fionn Higgins was harshly yellow carded for a deliberate knock on by referee Jonny Erskine, when many in attendance felt that the player was committed to the tackle. Malone made full use of the ten minutes which Naas were down to 14 men, scoring 14 points in this period. They reduced the margin on 57 minutes when following wave and wave of attacks they were just denied a score by a great try saving tackle by Matt Stapleton. However the ball was quickly recycled and Lewis Finlay got over for the score. Then on 61 minutes some quick hands by the Malone backs put David McMaster clear and he was able to score near the posts. With Campbell converting both the lead was reduced to 31-17.

However Naas shattered any thoughts of a dramatic comeback with a fine score after 75 minutes. The forwards made some hard yards before the ball was quickly moved out left where Fionn Higgins was lurking and he finished in style. Peter Osborne added his fifth conversion of the day and the lead was back out to 38-17.

There was still time for two late scores. On the stroke of time Stewart McKendrick got over for a consolation try for Malone which Campbell converted, before Osborne ended the scoring for the day with a long range penalty in injury-time. Final Score: Naas 41 – Malone 24.

A very satisfactory victory for Naas who responded in style to their defeat by Old Belvedere. Yet again their backs showed that given ball they are capable of breaking down defences, but credit to the pack who put in a hard shift to gain them the ball to work with. Particular credit must go to Adam Coyle and Paul Monahan who tackled everything that moved, while the scrum was rock solid all day. Next up for Naas is an away trip to early pace setters Highfield. This is on next Saturday with a 2.30pm kick-off and all away support will be greatly appreciated.