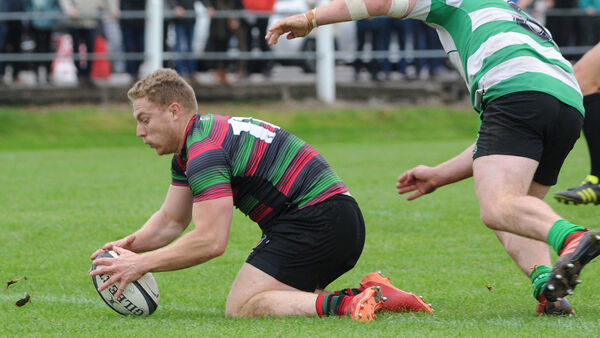 As Naas set off for the trip to Woodleigh Park last Saturday to face Highfield, they knew a daunting prospect awaited them. When Covid caused a halt to the 2019/’20 AIL League Highfield were clear at the top of the table, and already this season - after just two games – they were back at the summit of Division 1B. To further emphaise the enormity of the task awiting them was the fact that the last time Highfield lost a home AIL game was away back on October 6th, 2018 when Queens University achieved the feat.

A decent Naas crowed travelled to see how they would get on, and they would have been delighted with what they saw in the first 20 minutes. There was a late change to the side with Fionn Higgins replacing the injured Craig Ronaldson and Naas tore into their opponents straight from the kick-off. They were rewarded after just two minutes, when following the award of a penalty for a high tackle, a well struck kick by Peter Osborne split the posts to put them three points ahead.

Osborne was narrowly wide with another penalty attempt after six minutes as Highfield struggled to get out of their own half, and in addition the home side lost their influential out-half James Taylor who did not recover from a shuddering collision with Paulie Tolofua. However Naas will rue the fact that their dominance in the opening quarter only led to three points, and in particular to the fact that they turned down two kickable penalties during this time in favour of kicking to touch.

Highfield ruthlessly punished Naas for this by taking the lead with their first very attack after 25 minutes. Good, hard, direct running by Mark Dorgan and Ryan Murphy took play up to the Naas 22, the ball was then moved quickly to the left by the backs and Sam Burns who had come as a replacement scored in the corner. Paddy O’Toole was unlucky to see his conversion attempt from the side-line rebound back off the posts.

This score gave Highfield a real boost, they moved up a gear and took control of the game. They went straight back on the attack, going through over 25 phases and it took some brilliant and heroic defence by the away side to keep them out. Naas thought they had averted the danger when they won a penalty after Highfield collapsed a scrum, but what happened next produced one of the real talking points in the game. After the penalty award the Highfield prop James Rochford and Peter King of Naas gently pushed each other , but referee Kieran Barry saw fit to reverse the penalty award in favour of the home side. The penalty was dispatched into touch, from the line-out the home side set up their famed driving maul, and powered over the Naas line with Robert Murphy being awarded the try. Paddy O’Toole added the conversion and Highfield led 12-3, which was to be the half-time score.

Highfield made a blistering start to the second-half and within 90 seconds had increased their lead. When Naas were penalised for crossing, Highfield again kicked to touch. However this time the line-out was not won cleanly which ruled out the option of a driving maul for them. But this did not deter them they moved play into the centre, a couple of pick and goes followed, before Ronan O’Sullivan picked from the base of the ruck and powered over. O’Toole again added the conversion to stretch the lead to 19-3.

Naas to their credit kept trying and almost responded immediately. A superb midfield break by Bryan Croke split the home defence apart, but Naas were denied quick ball as Highfield were penalised for not rolling away. This led to a penalty for Naas which was taken quickly by Paulie Tolofua. He was stopped just short of the line, and this time there were plenty of Highfield hands in the ruck. Referee Kieran Barry had seen enough, he brandished a yellow card at Robert Murphy and awarded Naas another penalty from which they opted for a scrum. From this Naas moved the ball wide but there was adequate cover from Highfield and they were able to force the attack into touch and the chance was gone.

The game was ended as a contest when a piece of brilliant individual skill by Highfield winger Paul Stack led to their fourth try on 57 minutes. A Naas clearance kick by Tim Murphy, was fielded by Mark Dorgan on half-way. When he was hauled down the ball was passed to Stack who evaded an attempted tackle before chipping over the Naas defence. He then gathered the loose ball before scoring under the posts. The conversion by O’Toole made it 26-3 to Highfield.

It was to get worse for Naas before the final whistle. On 63 minutes Travis Coomey got in for another try with O’Toole adding the extras, while in the closing stages Naas were reduced to 13 men following two yellow cards. Tremendous credit must go to Naas here as wave after wave of Highfield attacks were met by some brave defence. However with the very last play of the game the ball was spun wide, and Naas simply did not have the numbers to keep them out with Ben Murphy scoring in the corner. For the second time in the match O’Toole hit the post with his conversion attempt but it mattered little, with Highfield running out deserving victors on a 38-3 scoreline.

While it was a sobering day for Naas, no one could fault their bravery in adversity and it will be a long time before they meet a side of the calibre of Highfield. They have a fortnights break to regroup before they face Old Wesley at home on October 30th, with a 2.30pm kick-off. As always all support will be greatly appreciated.