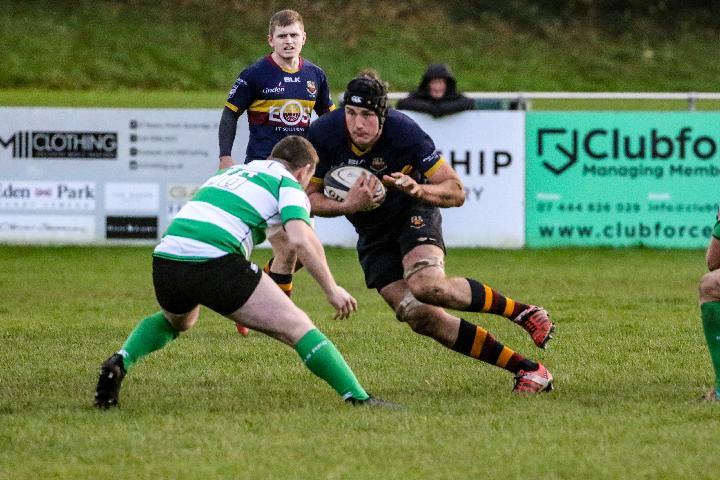 A strong second half performance saw Naas claim a vital victory away to Banbridge last Saturday afternoon. In the end not only was the win secured, but also a valuable try bonus point, helping to erase a couple of recent disappointing performances.

Although it was dry the game was played with a strong swirling breeze, which ruled out any chance of open, flowing rugby. Banbridge dominated the early exchanges and missed the chance to open the scoring after four minutes, when Adam Doherty was short with a penalty attempt.

It was Naas who opened the scoring on eight minutes in somewhat bizarre fashion. The Banbridge out-half Andrew Morrision in attempting to kick downfield completely miss-hit the ball, landing it straight in the hands of Conor Doyle who was standing just five yards away. Doyle quickly transferred the ball to Gary Kavanagh who sprinted clear to score under the posts. The easy conversion by Peter Osborne put Naas seven points clear.

Incredibly within 30 seconds Banbridge hit back. The restart was gathered by Donal Conroy who chipped over the heads of the Banbridge defence. However his chip was gathered by Adam Doherty who raced clear to score in the corner without a hand being laid on him.

Doherty missed the conversion and another penalty attempt  on 29 minutes, but almost immediately they were in front for the first time. They were awarded another penalty by referee Stuart Gaffikin for a high tackle, and this time they declined the shot at goal and kicked into the corner. From the line-out they set up a driving maul which powered over the Naas line with Peter Cromie awarded the try. The conversion by Doherty was again missed leaving Banbridge 10-7 in front. This was to be the interval score although Peter Osborne narrowly missed a long range penalty attempt after 36 minutes.

Within four minutes of the restart Naas were back in front, when a fine carry by Ryan Casey tore the Banbridge defence apart and took play up to the 22, the ball was then quickly moved wide left by the backs out to Donal Conroy who finished in style. The conversion was difficult but Peter Osborne struck it beautifully and Naas now led by 14 points to ten.

The home side had little in the way of attacking threat bar one weapon – their driving maul and they used this to score their third try on 49 minutes. When Naas were penalised for hands in a ruck on half-way the penalty was quickly dispatched to touch. From the line-out the maul was set up and Naas were powerless to stop the drive over the line, with Peter Cromie again touching down. This time Doherty was successful with his conversion attempt.

On 60 minutes Naas took the lead – one that they never relinquished – with a well worked try. From a line-out they set up a driving maul of their own which Banbridge collapsed. From the resulting penalty they opted for a scrum from which Paulie Tolofua broke from the back of. He took play up to the 22, the move was then carried on by Peter King and Ryan Casey, before it was moved out to the backs and Peter Osborne. A  beautiful side step  by Osborne took him clear of his would be tackler and he raced clear to score. He added the conversion himself to leave Naas 21-17 in front.

With seven minutes to go Naas added a fourth try which secured the bonus try point and ended the game as a contest. Again it was the pack who made the hard yards with John Sutton carrying powerfully, before off loading to Paulie Tolofua. There was no stopping the No.8 as he shrugged off two tackles to score beside the posts and with Osborne converting the lead was extended to 11.

Banbridge did manage to score a late consolation try just on the stroke of full-time, when following yet another driving maul Michael Cromie scored although Doherty kept up his poor day with the boot when again missing the conversion, to leave a final score of Banbridge 22 – Naas 28.

No away wins are easy in this league so Naas will be thrilled to leave the North with a full complement of points. Although their line-out malfunctioned for most of the game, the scrum dominated and their defence was as always top class. The strength of their bench was also emphasised here as John Sutton, Paulie Tolofua and Peter King made telling contributions on their introduction in the second-half.

Next up for Naas is a home fixture against Armagh on Saturday, November 20th. This has a 2.30pm kick-off and as always all support will be greatly appreciated.