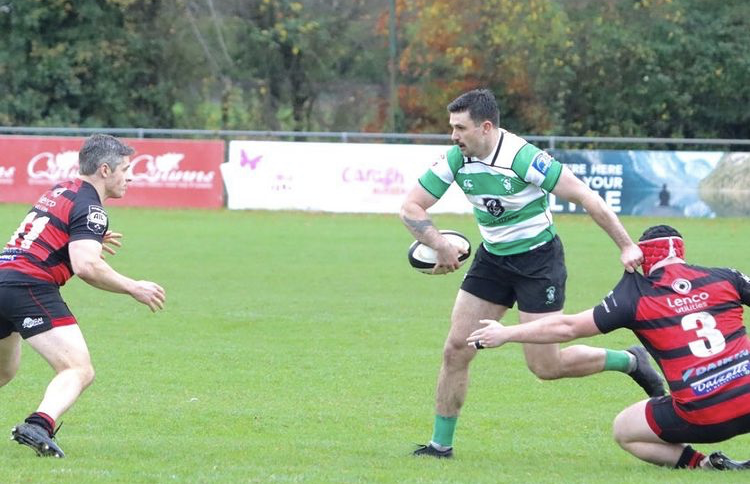 Having beaten Banbridge on their previous outing, Naas again faced Northern opposition when they entertained City Of Armagh last Saturday. Conditions were difficult for both sides due to a heavy shower just prior to kick-off, but they both tried to move the ball at every opportunity and treated the large crowd present to a fine game, with the result in doubt right up to the final whistle.

Naas took the game to their opponents right from the start and were rewarded by taking the lead after nine minutes. Armagh were penalised for not rolling away at a ruck and from forty yards out Peter Osborne split the posts with his penalty effort.

They increased this lead after 15 minutes. Their scrum has been extremely solid all season and here it was a dominant force. When Armagh won a scrum on their own ten yard line, Naas pushed them right off it, creating a tremendous scoring opportunity for themselves. They took this in style. Following some good ball retention with decent interplay between forwards and backs, the ball was then moved to the left when Bryan Croke was in plenty of space and he made no mistake in scoring a fine try. The conversion was missed but Naas led by eight points.

However that lead lasted for all of sixty seconds. Naas knocked on the Armagh restart, the visitors managed to win this scrum with No.8 Neil Faloon picking up from the base of it. He was stopped just short of the line, but quick hands by their backs quickly transferred the ball out wide to Andrew Willis who scored in the corner. Kyle Faloon was unsuccessful with his conversion attempt leaving the score 8-5 in favour of Naas.

A baffling decision by referee Henry Richmond saw Armagh equalise. As stated the Naas scrum was dominant, but when one collapsed on 28 minutes he deemed that it was the fault of Naas and awarded Armagh a penalty. The decision infuriated the home supporters but Kyle Faloon made no mistake with his kick to leave the scores tied at 8-8.

Naas missed a great chance to retake the lead on 34 minutes after Armagh were reduced to 14 players for a deliberate knock-on. The home side kicked the resulting penalty into touch, the line-out was won by David Benn and a driving maul was set up which drove Armagh back. However the players in the front got detached from the maul, giving Armagh a penalty and they gleefully cleared their lines. They took full advantage of their reprieve by taking the lead just on half-time. Naas were penalised at a ruck and Kyle Faloon slotted the penalty to leave the half-time score 11-8 in favour of Armagh.

Two Peter Osborne penalties in the first ten minutes of the second-half put Naas back in front and at this stage the home side were dominating territory and possession, with Armagh struggling to get out of their own half. On 63 minutes Naas went further in front when a superb break by Donal Conroy cut open the Armagh defence, and when he was stopped close to the line Neil Faloon came straight in off his feet. The referee had no hesitation in awarding Naas a penalty and brandishing a yellow card to Faloon. Peter Osborne tapped over the penalty and the home side were now in front by 17 points to 11.

However a failure for Naas this season has been the concession of a score straight after scoring themselves. It happened again here and was to prove to be extremely costly. Naas knocked on the resulting kick-off and Armagh took full advantage by quickly moving it out to their left to Andrew Willis who shrugged off two tackles to race clear to score. The conversion was not easy but Kyle Faloon’s attempt with the aid of a post was successful to put his side 18-17 in front.

To their credit Armagh saw out the remaining minutes without much alarm , although their task was made easier when Naas were reduced to 14 men on 76 minutes for a dangerous tackle, and when the full-time whistle was blown they had achieved a hard earned victory by 18 points to 17. This is a defeat that Naas will rue. They were the better side for almost all of the second-half but they switched off for a matter of seconds and it cost them dearly. They do not have much time to regroup as they are out again next Saturday when they travel to face Shannon. Kick-off is at 2.30pm and as always all support will be greatly appreciated.