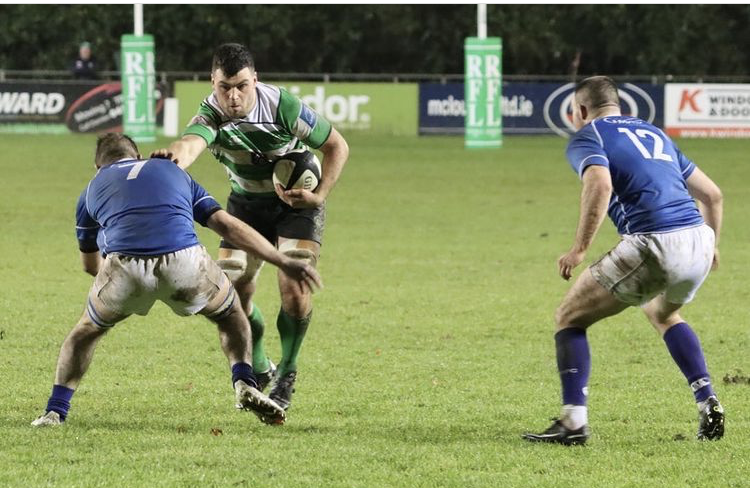 After their great victory over Shannon last week, Naas knew it was imperative that they followed up with another win when they entertained St. Mary’s College last Friday night. They achieved this by dismantling their Dublin opponents by 16 points, with the winning margin a fair reflection of their superiority.

A massive crowd turned up for this fixture and thankfully the rain held off for most of the game, albeit the showers that had fallen prior to the match made handling conditions difficult. Naas got off to a dream start scoring within two minutes. When St. Mary’s elected to run from just inside their own half, they failed to see Gary Kavanagh lurking. The Naas man gleefully intercepted a pass by Myles Carey and he was not for catching, as he sprinted clear to score under the posts. Peter Osborne tapped over the conversion and the home side were in front by seven points.

Osborne was again successful with a penalty attempt after 18 minutes, but although it was Naas who were doing the majority of the attacking, it was to be the visitors who were to score next. Referee Paul Haycock awarded them a penalty for a no-hands tackle which they dispatched to touch. From the line-out Ronan Watters was stopped just short of the line, the ball was then recycled and Liam Corcoran powered over from close range. Mick O’Gara added the conversion to leave the score 10-7 in favour of Naas.

The remainder of the first half belonged to the home side, and they increased their lead on 27 minutes with a brilliant try. From a scrum on the 10 metre line the Naas backs moved the ball out left where Donal Conroy took a superb line that completely sliced open the defence, and he raced clear without a hand being laid on him to score. The conversion by Peter Osborne was again accurate.

There was nearly a third try for Naas on the half hour mark, when following a knock-on by Mick O’Gara, Bryan Croke reacted quickest to hack the ball forward, which in turn was kicked forward by Donal Conroy. The Mary’s defence scrambled back to save a certain try but in the process conceded a penalty in front of the posts, which Peter Osborne tapped over to make the score 20-7 in favour of Naas, and this was to be the score at the interval.

The second half followed the pattern of the first with Naas again the dominant force. They went further in front after 49 minutes when a powerful run by Craig Ronaldson put the visitors on the back foot, leading them to concede a penalty for the tackler not releasing ,which Peter Osborne again made no mistake with.

The game was ended as a contest after 56 minutes. A lovely chip through by Bryan Croke put the Mary’s full-back Ruairi Shields under tremendous pressure forcing him to concede a line-out just five yards out. From this the Naas pack powerfully surged forward with a driving maul that Mary’s were helpless to contain, and John Sutton touched down for the try. Again Peter Osborne kicked the conversion and Naas were clear by 30 points to 7.

Mary’s to their credit did respond when following a yellow card given to Stephen Lackey a sustained period of pressure saw Michael McCormack score a try for them on 64 minutes which Mick O’Gara converted, and then after 78 minutes their captain Ronan Watters powered over for their third try. This conversion attempt by O’Gara was missed leaving the score 30-19 in favour of Naas.

It appeared this was going to be the final score as the game entered its final moments, meaning Naas would miss out on a try bonus scoring point that their performance certainly merited. However there was to be a dramatic final twist. The Mary’s lock Ian Wickham caught the restart but he then spilled the ball into the arms of Ryan Casey. Two quick passes followed and Tim Murphy was sprinting down the left touchline to score in the corner, causing great jubilation amongst players and home supporters alike. The conversion was missed, but it was irrelevant as the home side had secured everything they sought from this game, winning on a 35-19 score-line.

This was another majestic performance from Naas who have certainly hit a rich vein of form. Irish international Sean Cronin is one of the Mary’s forward coaches, and he will have looked on from the dugout in dismay as the Naas pack – with the likes of Adam Coyle, John Sutton, David Benn and Cillian Dempsey excelling – tore his charges apart. Given quality ball to work with the Naas backs are a match for anyone, as for the second week running they ran up a tally of 35 points, which is some feat. Next up for this Naas side is a visit to Navan next Friday night. Kick-off is at 8pm and all support will be greatly appreciated.

A note to advise on the death of Rose ROE (née McHugh) mo...