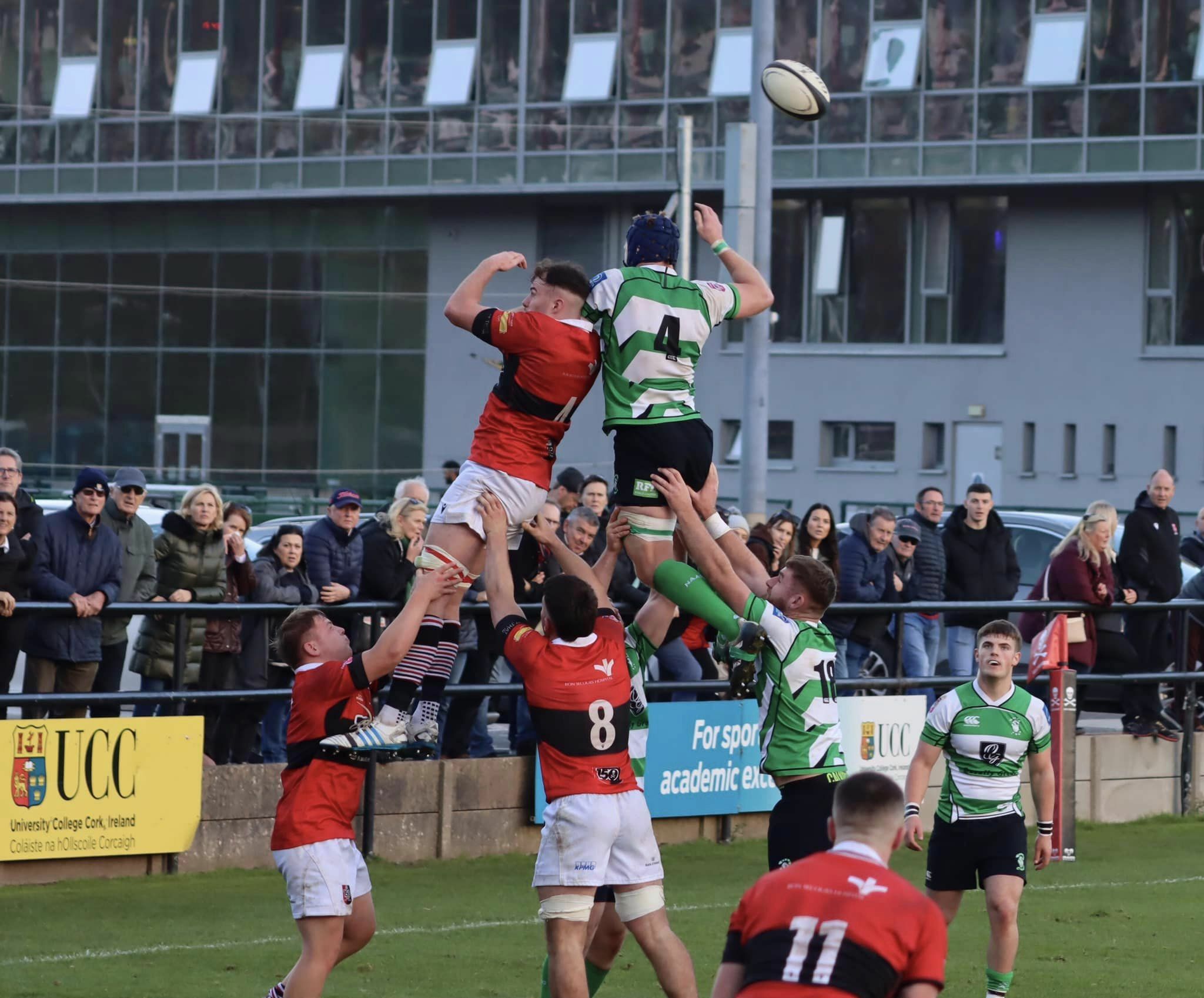 After regaining the winning thread in their previous outing against Malone, Naas travelled South last Saturday to face UCC full of confidence. They knew however that the challenge that awaited them was stern, as the Cork side went into the contest unbeaten this season and sat proudly at the top of the table. It was a challenge that Naas proved more than capable of meeting and they left with a deserving victory and five points into the bargain.

The game was played on a beautiful, dry and mild day and the pitch was a credit to the groundstaff. The home side suffered a blow when soon after the start they lost Jacob Sheehan to injury, and it was Naas who were to strike first after 13 minutes. From a scrum just outside the 22, Oscar Cawley passed to Bryan Croke who shipped the ball to Henry Smith. Croke then wrapped around Smith, took the return pass and raced clear to score to the left of the posts. He also converted the try to give Naas a seven point lead. 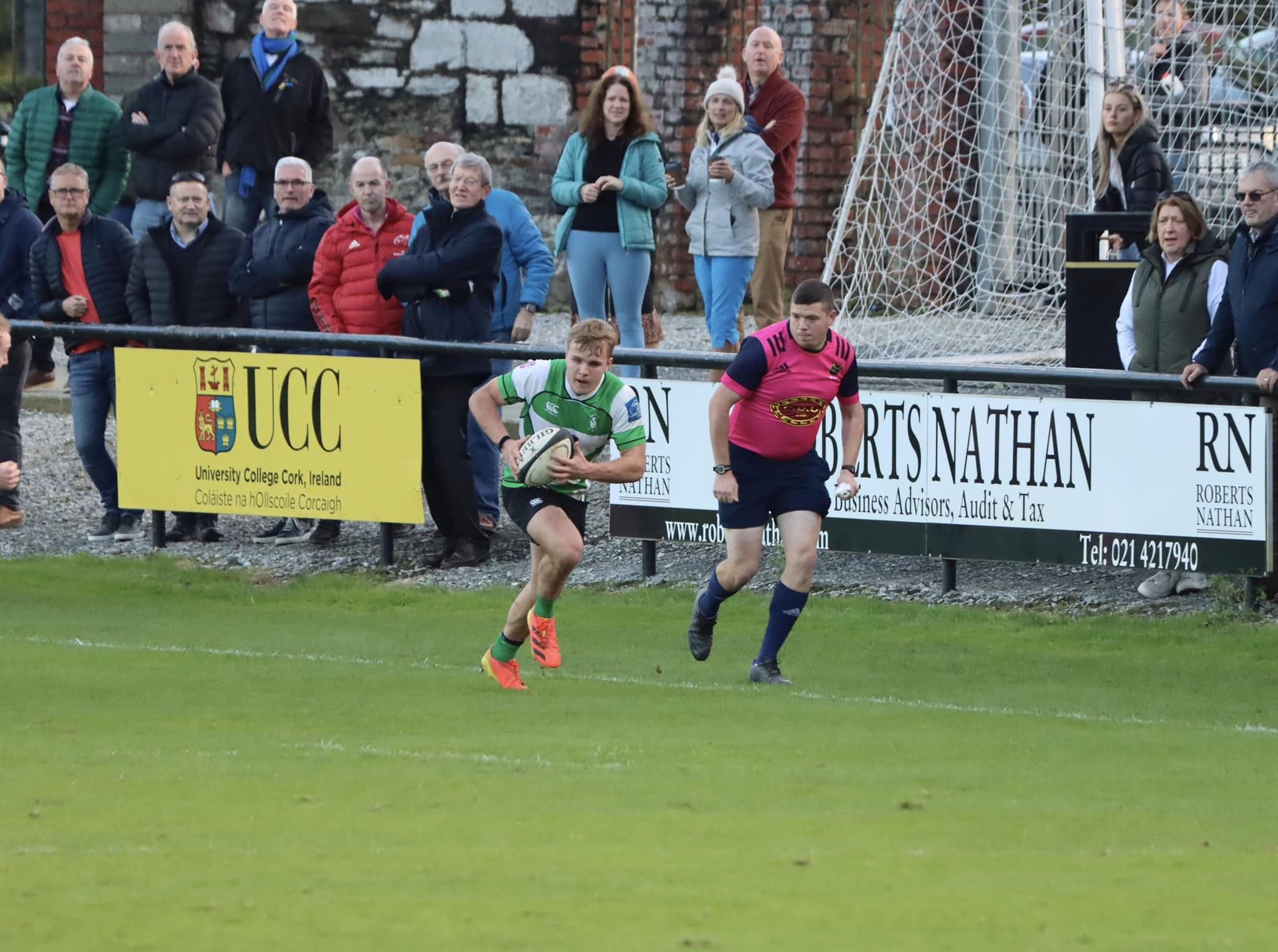 Unfortunately for them, that lead lasted for less than two minutes. Patrick McBarron fielded a high ball just inside his own half, and some quick hands by the Cork backs created an overlap for Joe O’Leary out wide, and the winger finished off the move in the right corner. A fine conversion by Daniel Squires levelled the scores.

From there to the half-time whistle though the visitors were the dominant force. Firstly David Benn did superbly well to block down by a kick by Cian Whooley which almost created a score, and then Bryan Croke was just short with a long range penalty attempt. 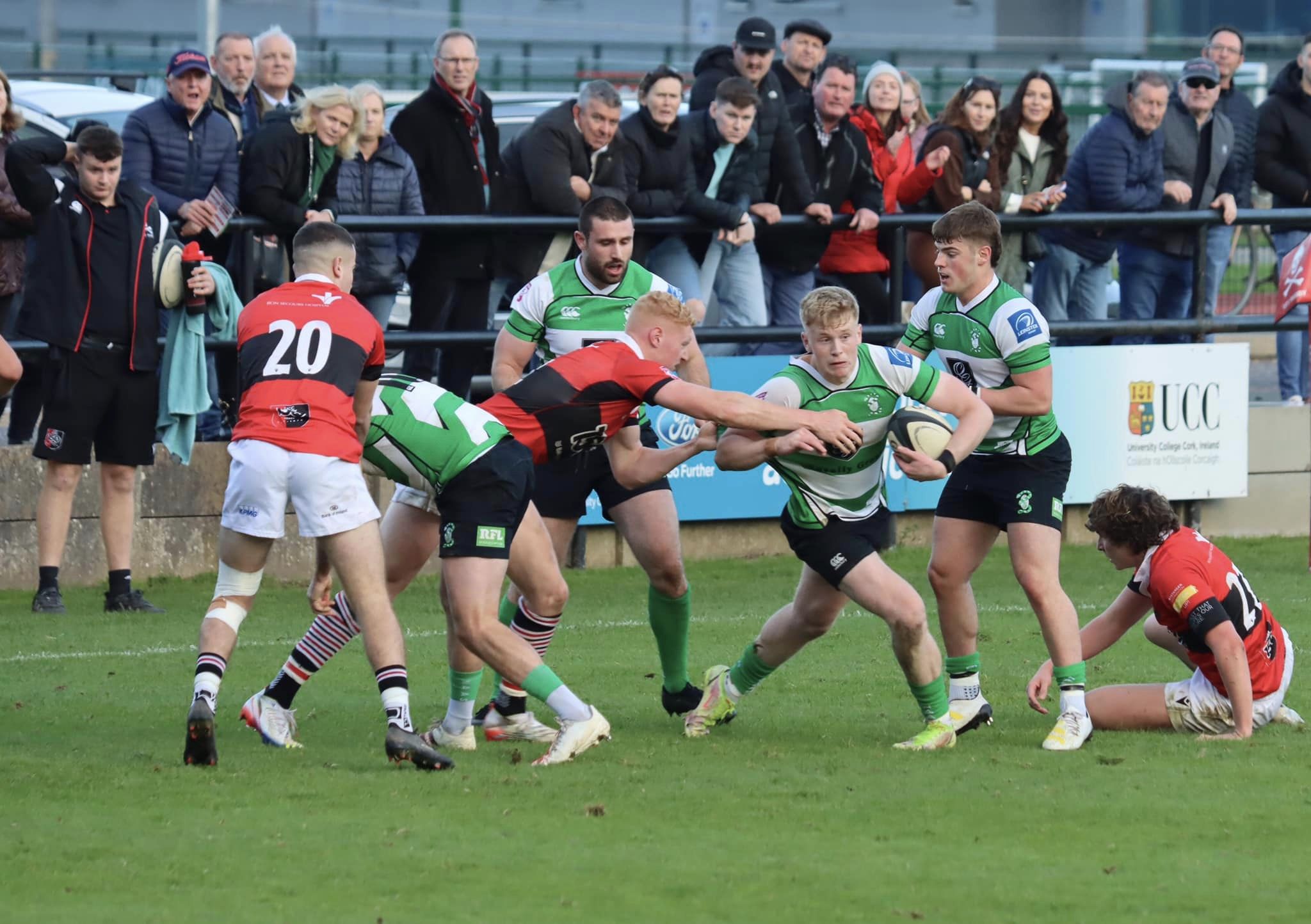 However Naas did regain the lead after 24 minutes. Good carries by the Naas forwards put the home side on the backfoot and led to the concession of a penalty inside the 22. Oscar Cawley - showing great initiative - took a quick tap and was immediately hauled down by Rory Duggan who had not retreated 10 metres. Referee Mark Patton had no hesitation in brandishing a yellow card to the Cork player and awarded Naas a penalty try.

UCC managed to see out the following ten minutes down a player without conceding another score, and almost scored themselves when Daniel Squires was narrowly wide with a penalty attempt, but Naas struck again in first half injury time. A well timed pass by Bryan Croke put Conor Doyle in space and his big carry took play up to the UCC line. Naas then quickly recycled the ball, moved it along the backline out to Andrew Osborne, who rounded off a fine Naas move by scoring in the right corner. Although the conversion was missed Naas held a healthy 19-7 lead at half-time. 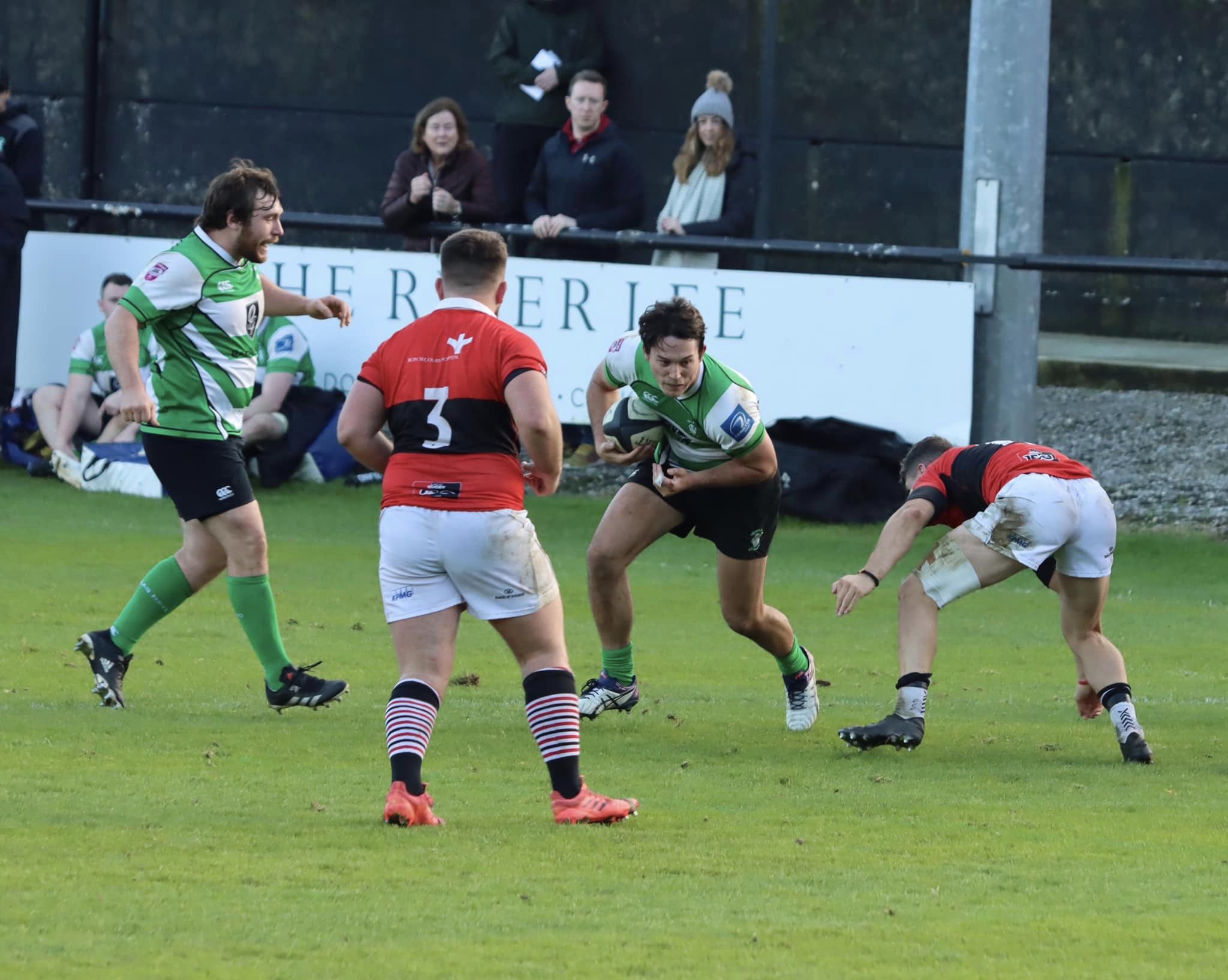 After 13 minutes of the second half UCC were right back in the game. Naas were penalised for hands in a ruck and the home side declined a shot at goal to go for the corner. The line-out was won by Mark Bissessar and a driving maul was set-up. This powered over the Naas line with Corey Hanlon being awarded the try. The conversion by Daniel Squires was successful and suddenly there was just one score between the sides at 19-14.

A moment of brilliance by Andrew Osborne after 60 minutes restored the 12 point lead for Naas. He took a superb line that split the UCC defence apart, before passing inside to Conor Halpenny. Then when the latter was stopped, Osborne was on hand to take the return pass and race under the posts to score. Bryan Croke tapped over the conversion to give Naas a 26-14 lead. 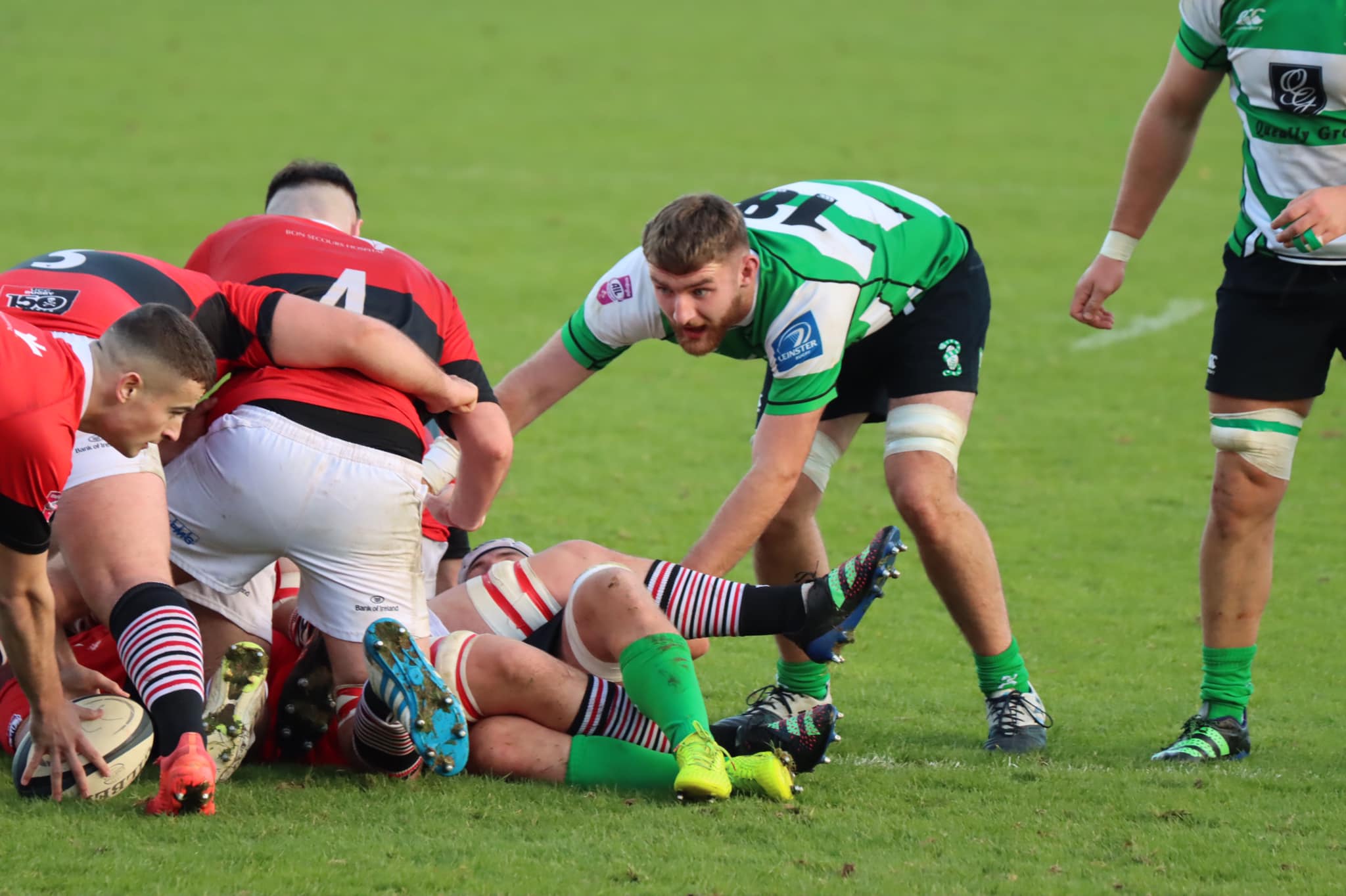 Cork threw everything at Naas in a bid to retain their unbeaten record and got the score to give them some hope on 74 minutes. Again they turned down a shot at goal to kick to touch, and from the line-out they again set up a driving maul. Naas dealt with it better this time around and stopped it just short of the line, but Michael Cogan managed to break free off the base of the subsequent ruck and crash over for a try. Squires converted and the lead was down to five points as the game entered the closing stages. 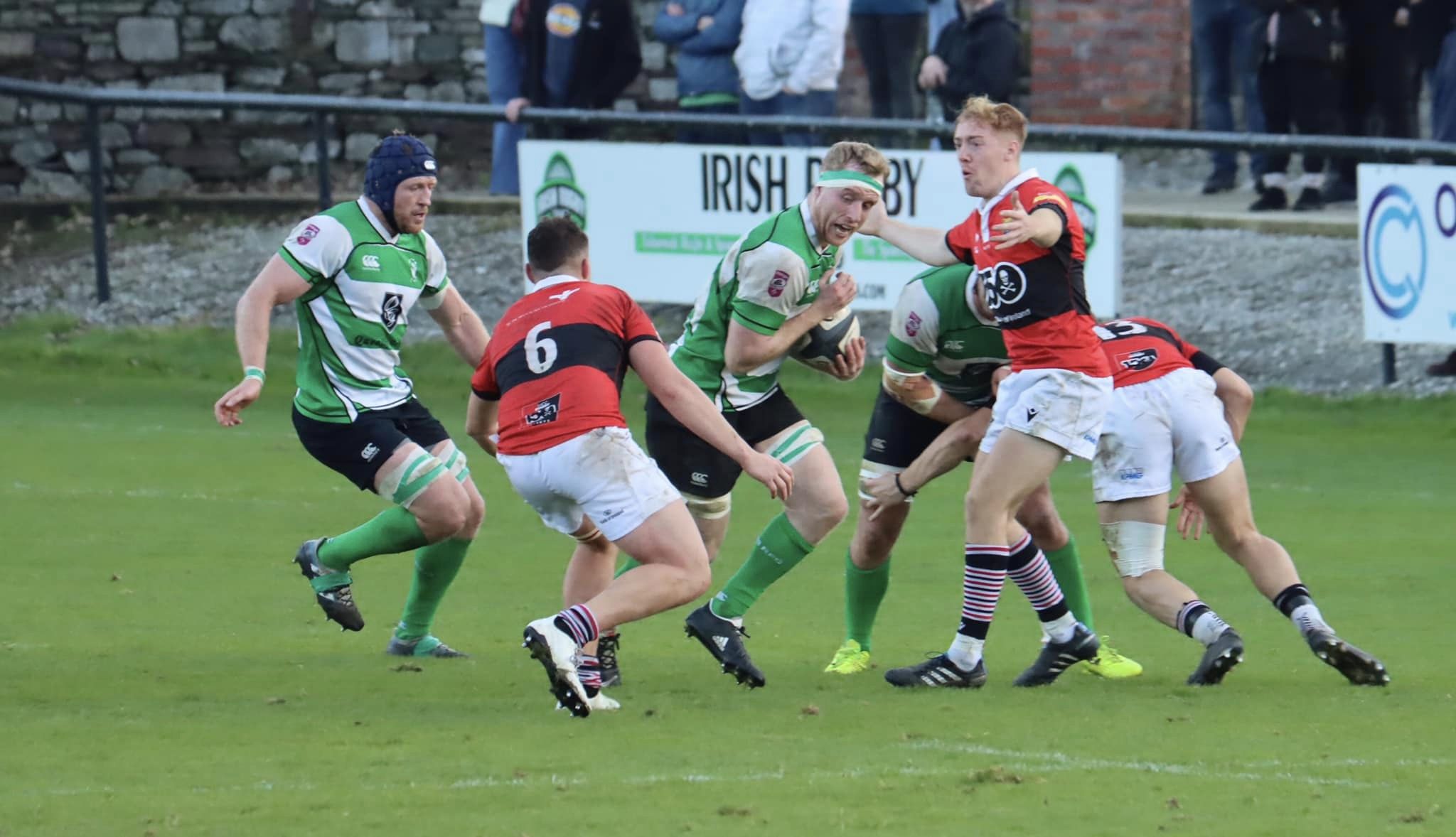 A few weeks ago Naas lost what appeared to be an unassailable lead in the final moments to Old Belvedere, but there was to be no repeat here. They defended bravely in the final minutes and time and again Corkmen were rocked back by some shuddering tackles, before referee Mark Patton brought a halt to proceedings and Naas could celebrate a superb victory. 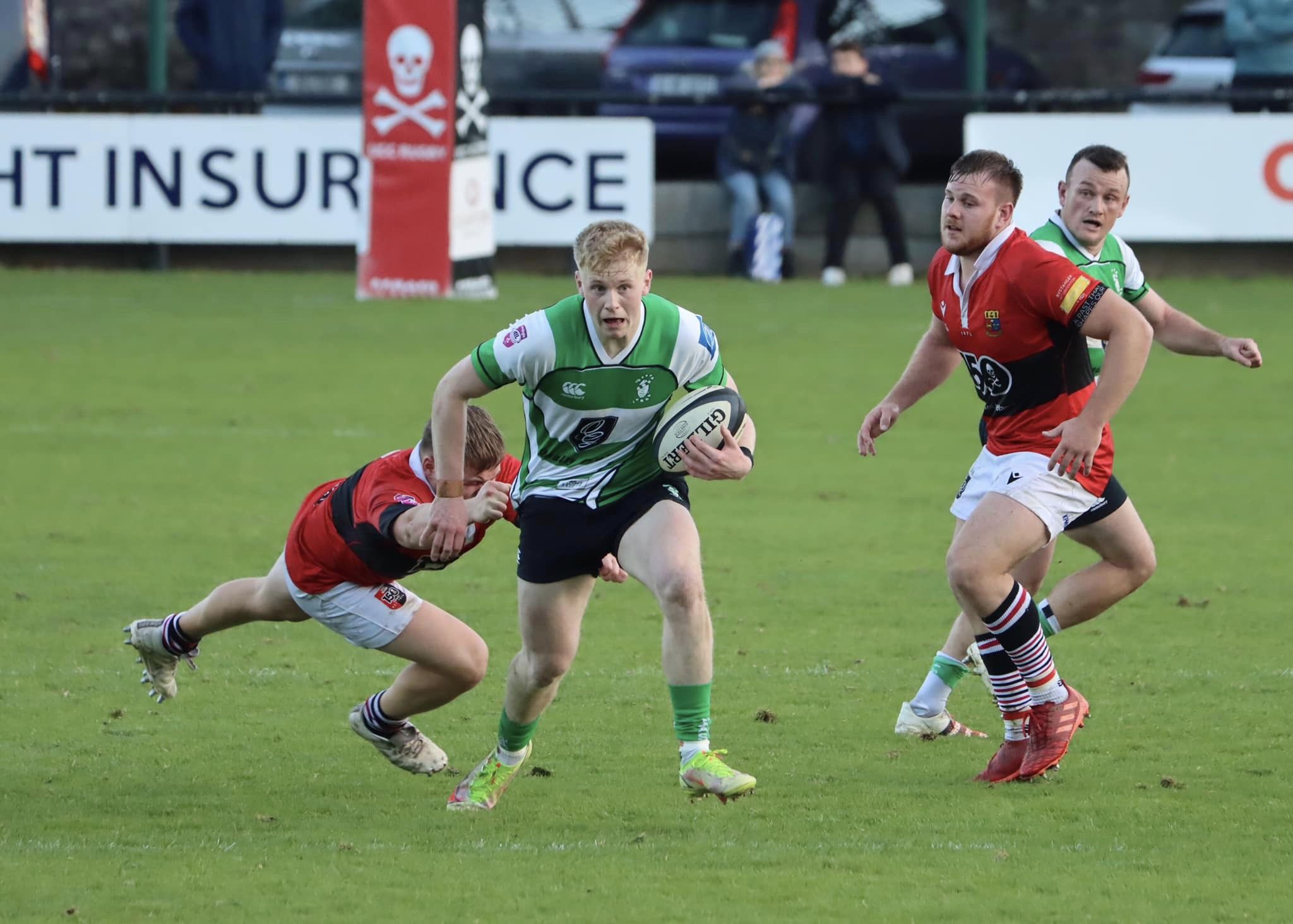 Naas are now marching up the league table and will hope to continue this progression when they face St. Mary’s College next Saturday afternoon. Games between these two sides are always keenly contested and very enjoyable, and there is no reason to expect this game to be any different. Kick-off at Naas is at 2.30pm and as always all support will be greatly appreciated.

Thanks to Naas Rugby Photos for the photographs - more over on their FB page.

Photos: Thanks to © Naas Rugby Photos