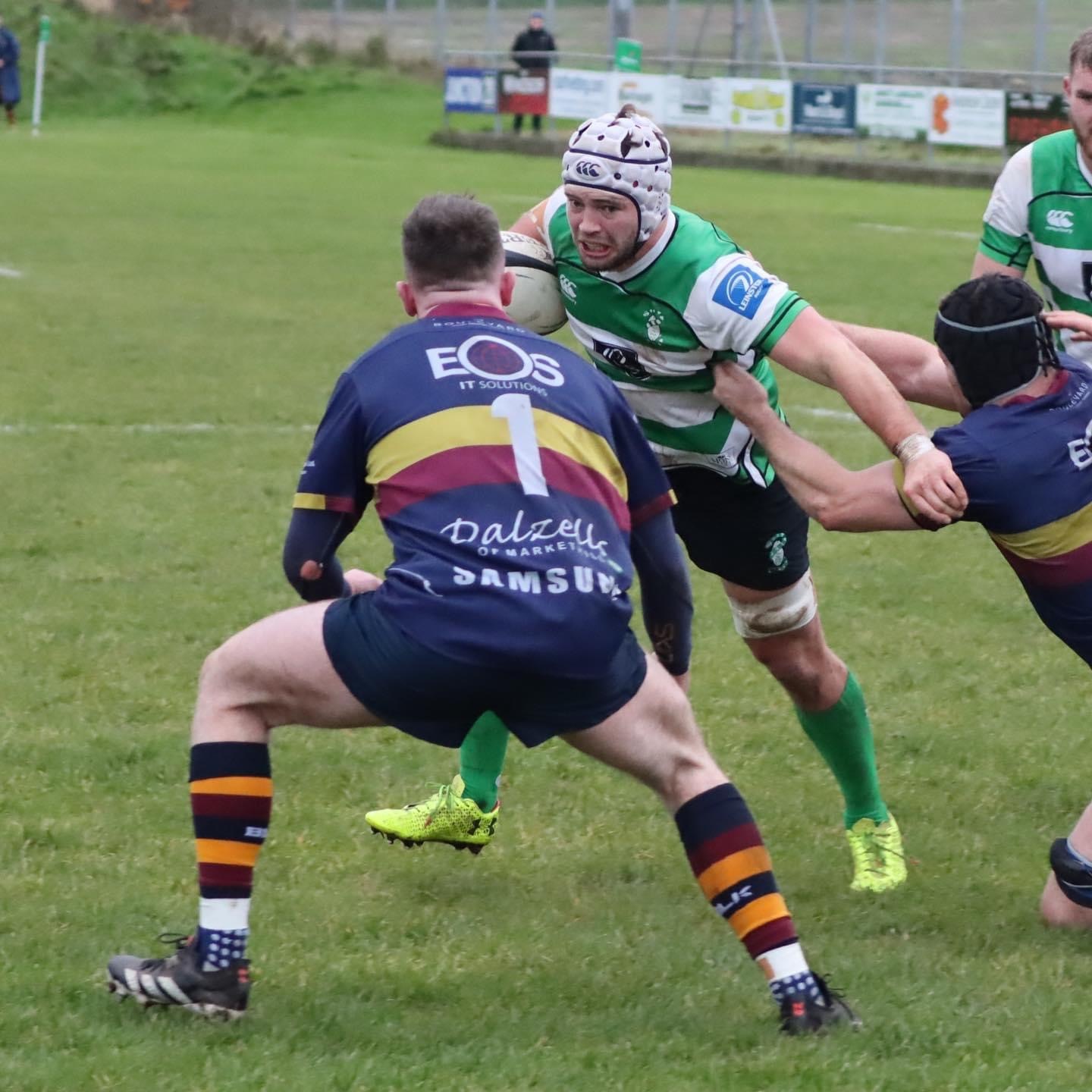 Naas travelled North last Saturday to face Banbridge in their latest Energia All-Ireland League Division 1B fixture. Having won both games against their Northern opposition last season, Naas were optimistic that they would again emerge victorious here, but after a fine start it was not to be, and they ended up being well beaten.

History shows that when these two sides play each other there will be plenty of rain and wind about, and it was again the case on Saturday. Naas had the advantage of the elements in the first half and were in front within 90 seconds. A clearance kick by Banbridge out-half James Humphreys was held up by the wind, and the home side then proceeded to play the ball in an offside position, giving Naas a penalty. From 35 yards out Bryan Croke made no mistake, and the visitors were three points to the good. 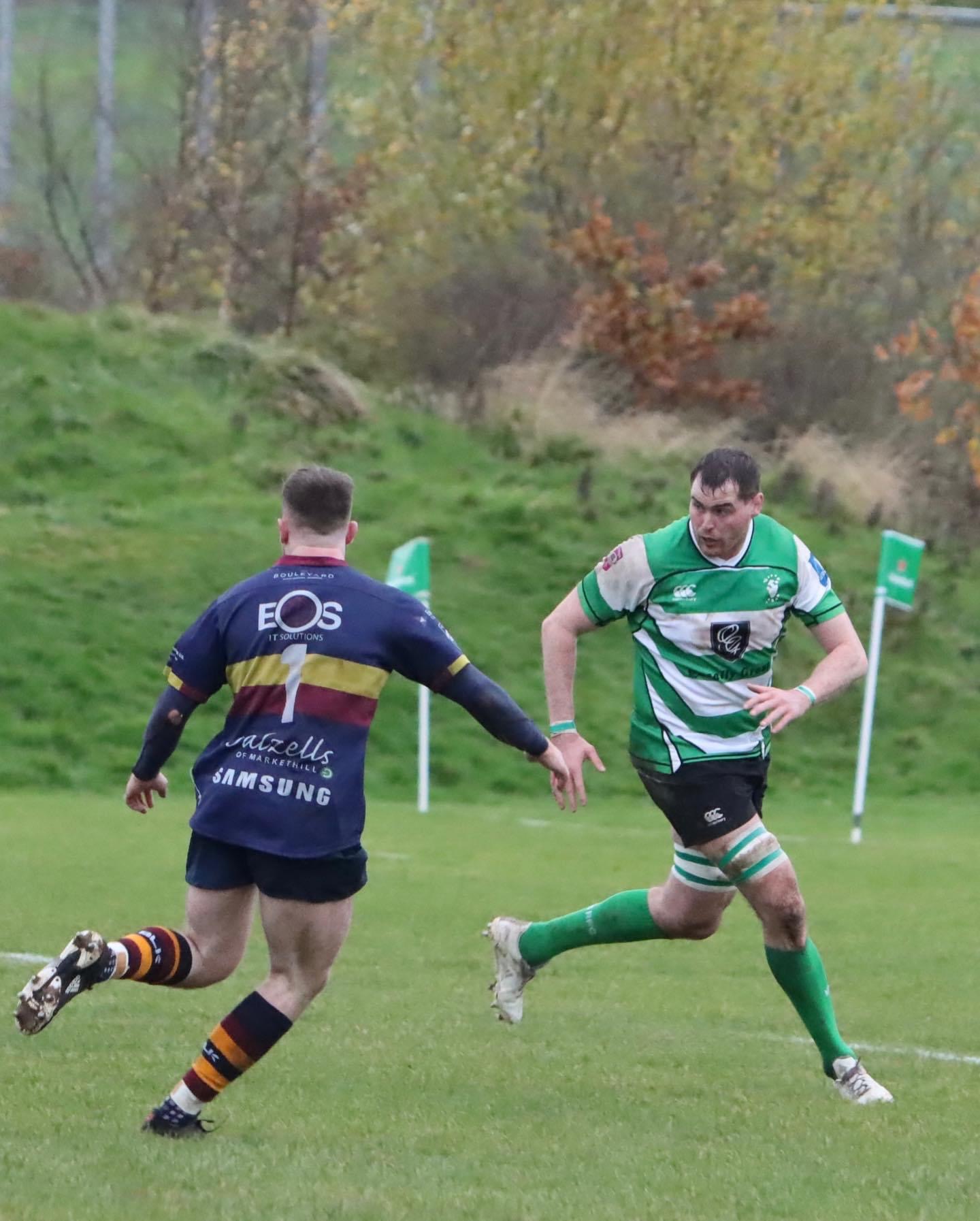 Within another three minutes Naas had their first try of the afternoon. Banbridge were attacking deep in the visitor’s half when Jack Sheridan intercepted. He cleared the ball and showing great pace he chased his kick and managed to dispossess the Banbridge full-back Rob Lyttle. Naas arrived in numbers and quickly moved the ball wide right out to Donal Conroy who scored in the corner. Although Bryan Croke missed an extremely difficult conversion Naas now led 8-0.

However, Banbridge hit straight back. Naas did not deal well with the restart and conceded possession, which the home side used to great effect. Despite the conditions they were able to go through the phases and eventually created an overlap on the right wing, where No.8 Robin Sinton rounded off a fine move to score. James Humphreys added the conversion to reduce the Naas lead to the bare minimum. 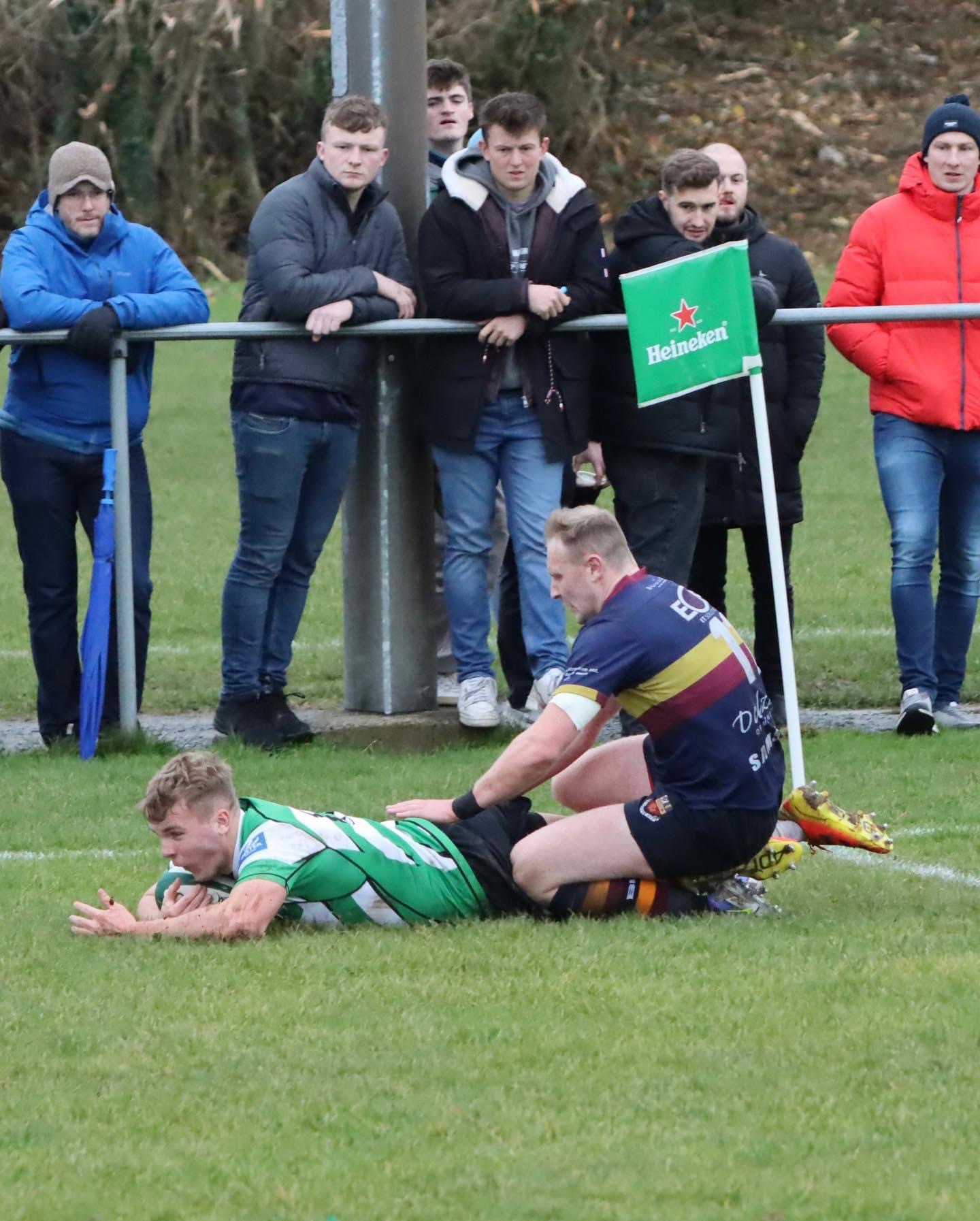 But from there to the half-time whistle it was all Naas. Their backs were creating untold problems for the Banbridge defence, and they were able to slice through them seemingly at will. After 19 minutes a fine break by Bryan Croke almost led to Henry Smith scoring, but the second Naas try was not long in coming. Great work by Conor Doyle and Patrick O’Flaherty drove Banbridge off a ball in midfield and Naas did not need a second invitation to attack. They quickly went down the blindside and good hands by Conor Halpenny and Bryan Croke put Fionn Higgins in space, and he sprinted clear to score. The successful conversion by Croke put Naas 15-7 in front.

Then after 31 minutes Jack Sheridan – who made an impressive All-Ireland League debut here – managed to fly-kick a ball deep into the Banbridge half. The visitors defence made a complete mess of dealing with it, it squirted loose, and Charlie Sheridan was on hand to touchdown for another Naas try. The conversion was narrowly missed, and James Humphreys added a penalty for Banbridge with the last kick of the half, to leave the score at the interval 20-10 in favour of Naas.

However, the conditions were worsening. The wind certainly got a lot stronger, and with heavy rain now to deal with, the question was would ten points be a sufficient lead for Naas in the second half. The answer was emphatically that it was not. Within three minutes the lead was reduced. From a line-out Banbridge set up a driving maul which took play right up to the line, before scrum-half Neil Kilpatrick broke free to score. James Humphreys missed the conversion but after 47 minutes he was successful with a penalty – awarded after Naas were caught offside - to leave just two points between the sides – 20-18 in favour of the visitors. 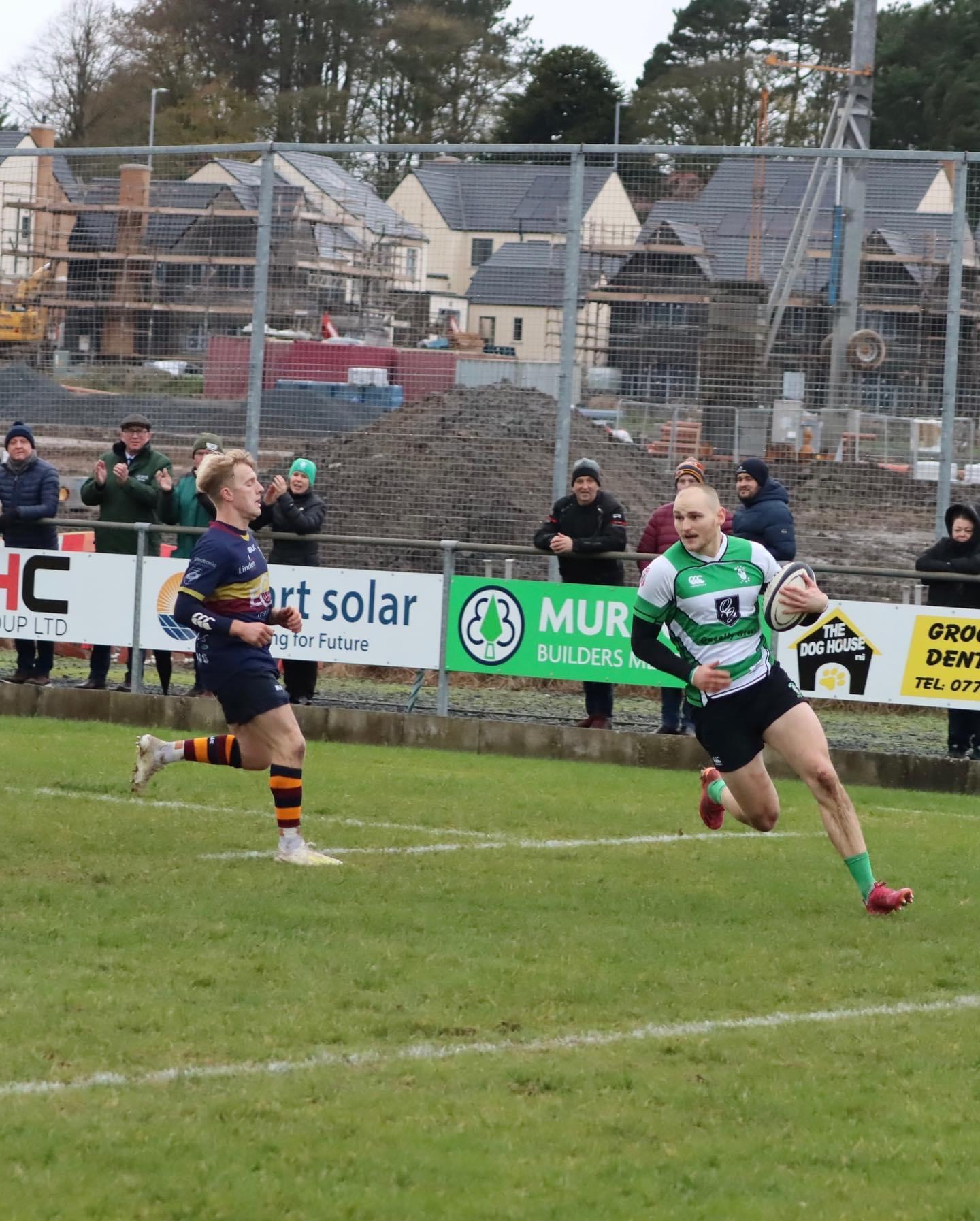 Banbridge were now totally in the ascendency and only some brave Naas defence kept them at bay, but finally after 67 minutes, a series of pick and goes by their pack drove the visitors right back and led to Max Lyttle crashing for a try, which James Humphreys converted to leave the score 25-20 in their favour.

A successful penalty by Rob Lyttle after 77 minutes moved the gap out to eight points, and after 80 minutes victory was sealed for the home side, when their captain Peter Cromie finished off some fine work by their pack when diving over close to the posts. Rob Lyttle tapped over the conversion, leaving the home side 35-20 in front, which proved to be the final score.

Naas to their credit went on the attack in the five minutes of injury-time played in an attempt to gain a fourth try, which would have secured a try scoring bonus point. They came close on a couple of occasions, but it was not to be, and when referee Daniel Carson blew the full-time whistle Naas left empty handed. 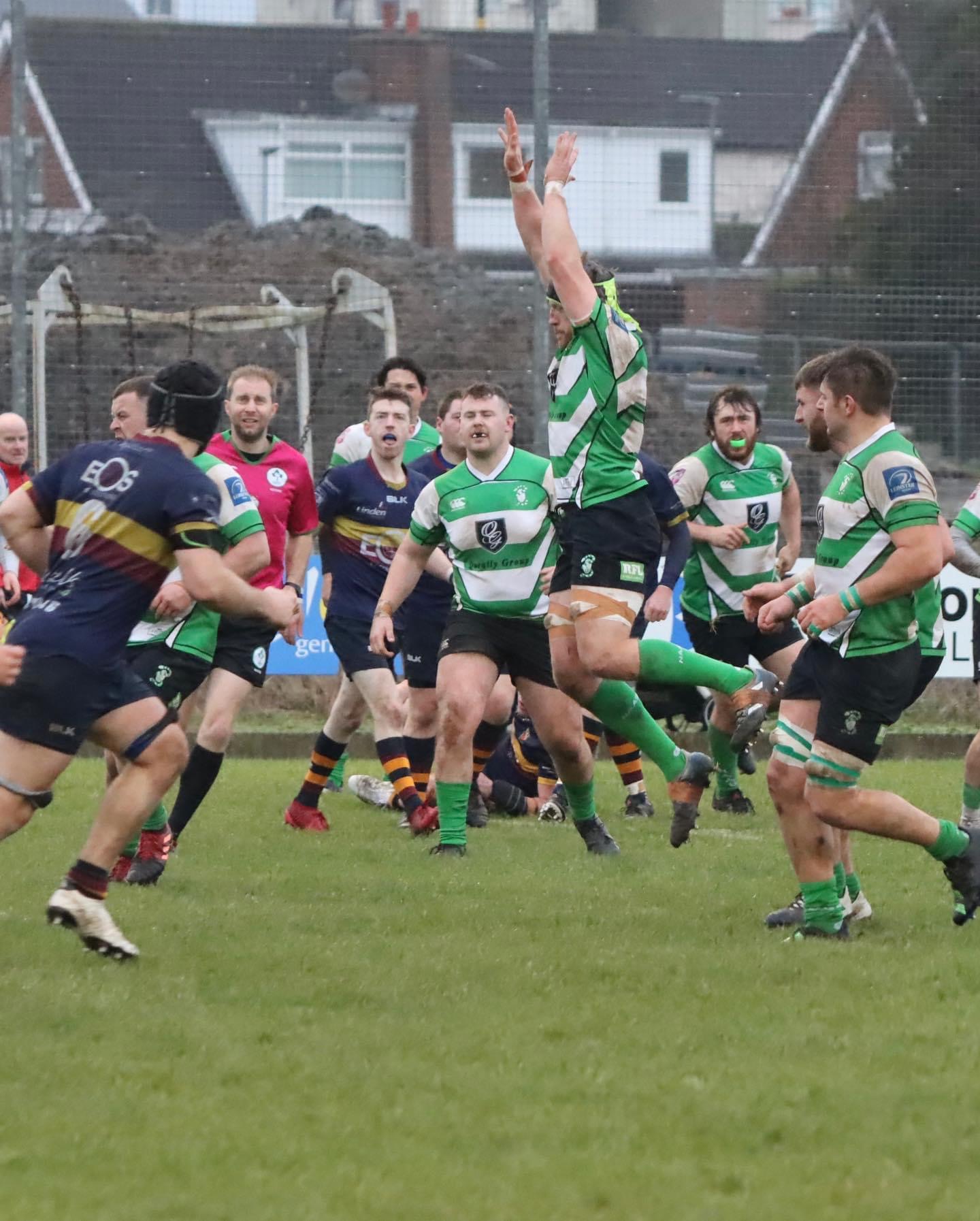 This was certainly not a performance that Naas will remember fondly, and they will be anxious to quickly remove it from the memory. They have the chance to get back to winning ways next Saturday when they again travel North – this time to face Armagh. Kick-off is at 2.30pm and all support will be greatly appreciated. 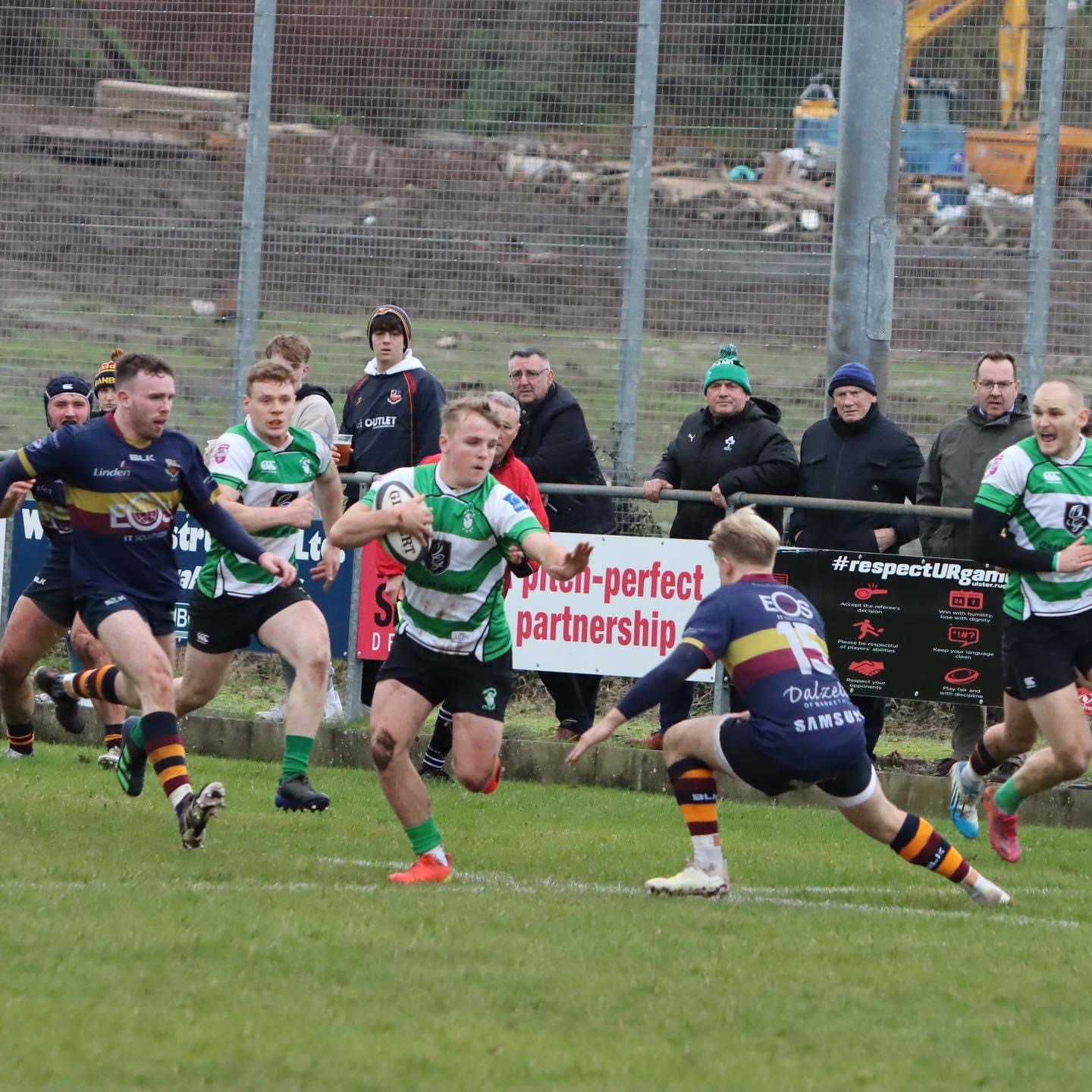