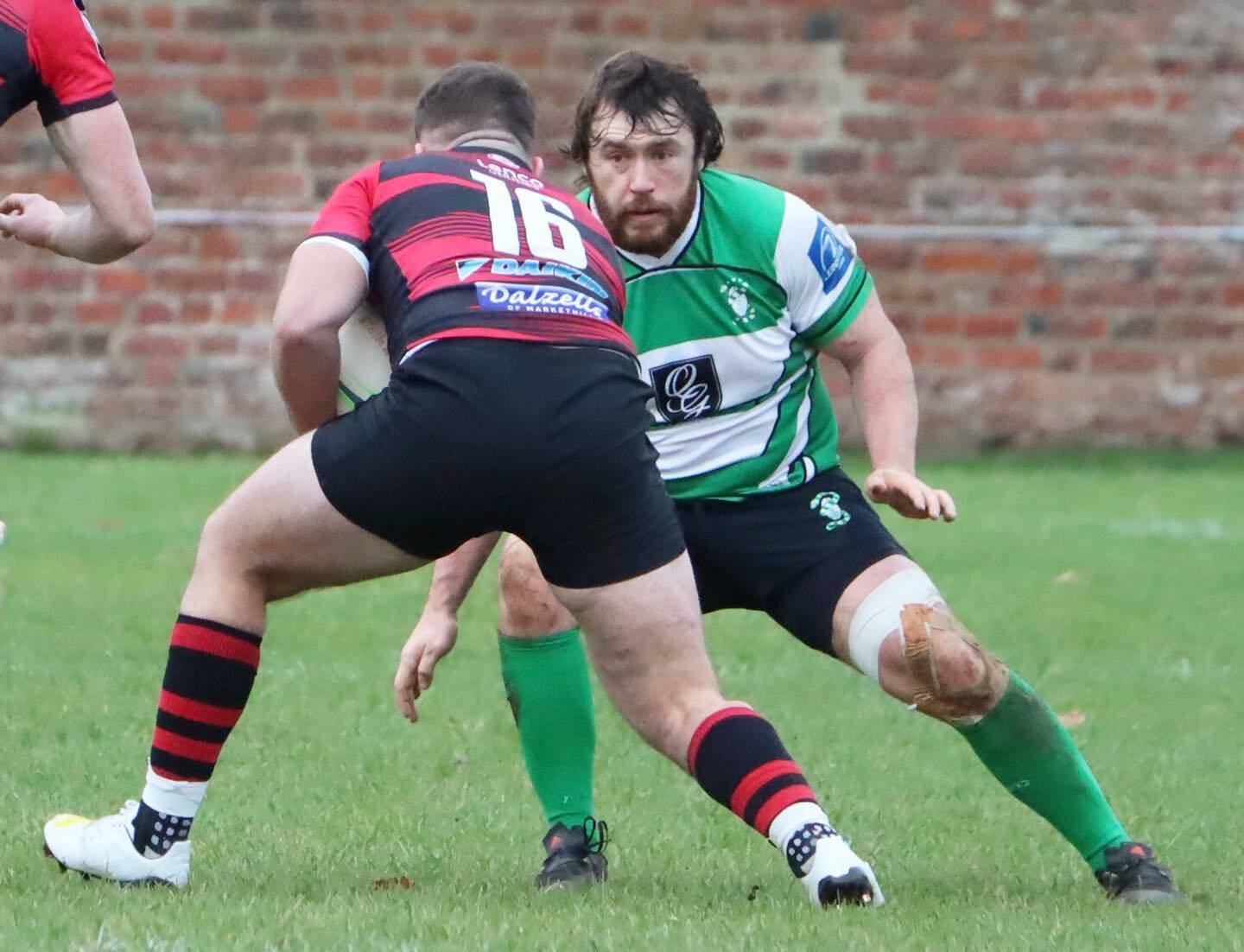 At City of Armagh

For the second successive week Naas travelled North for their latest Energia All-Ireland League Division 1B fixture – this time to face Armagh last Saturday. In total contrast to the previous week this game was played in ideal conditions – it was dry with little or no wind – and both sides used this to their advantage, serving up a fine game which saw no less than 65 points scored.

Naas were in front within two minutes. An up and under by Fionn Higgins was knocked on by Kyle Faloon and Armagh then played the ball in an offside position. Sam Cahill made no mistake with the resulting penalty to give the visitors a three-point lead. 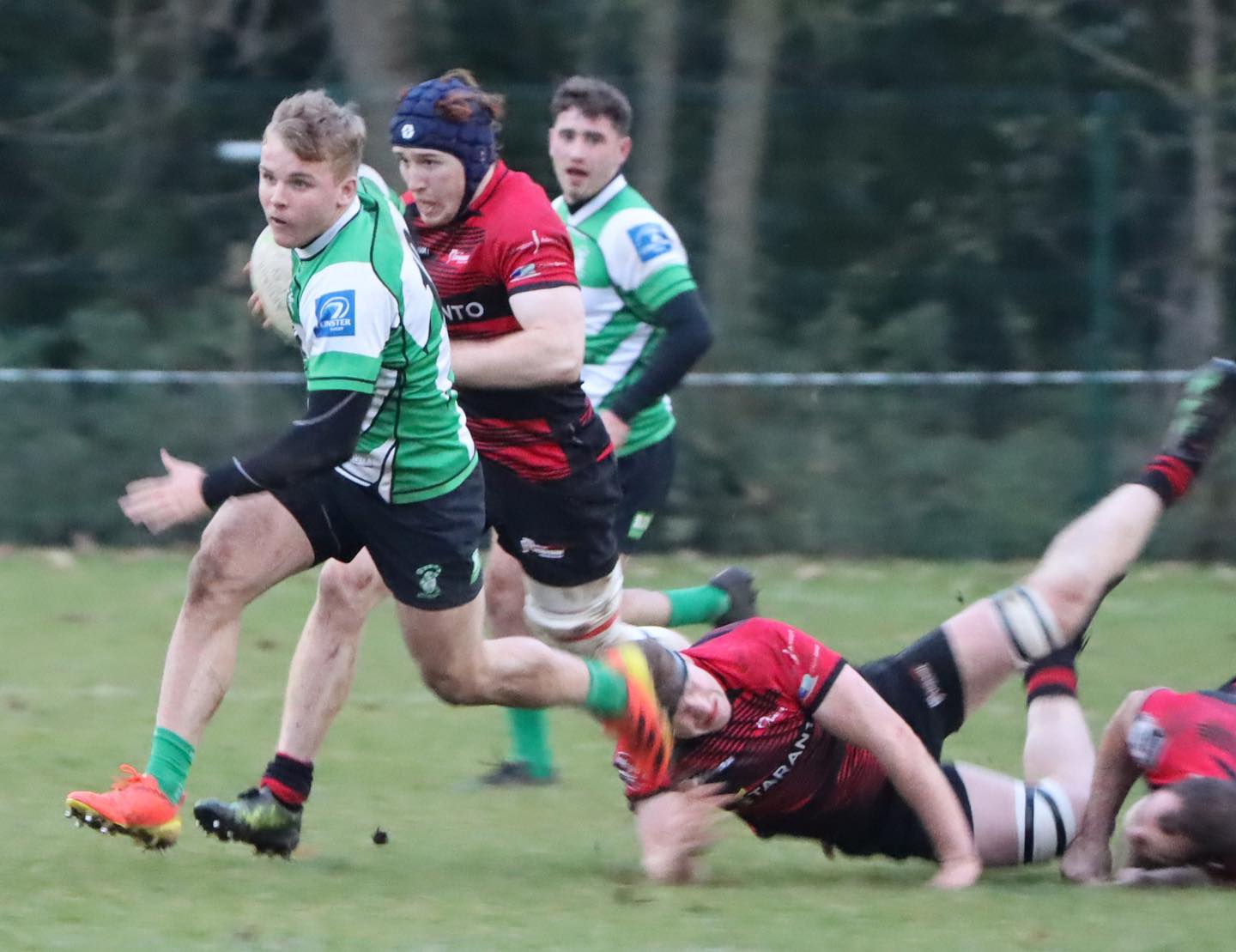 Armagh quickly went on the attack to respond to this, and sustained pressure from them led to Naas conceding a penalty after six minutes for hands in a ruck. The home side declined the shot at goal and went to touch, and after Josh McKinley won the line-out they set up a driving maul. When Naas collapsed this to concede another penalty, Armagh again opted to kick to touch. Frank Bradshaw-Ryan this time won the line-out, and again the driving maul was set up. However, Naas dealt with this one far better, stopping it quickly, and at a subsequent ruck Conor Doyle did brilliantly to get his hands on the ball, winning Naas a penalty to clear their lines.

But the home side did get on the scoreboard after 16 minutes. From a scrum 30 yards out, their backs attacked the blindside, and Andrew Willis evaded a couple of tackles before putting Dylan Nelson away to score. Michael McDonald was successful with the conversion to put them 7-3 in front. 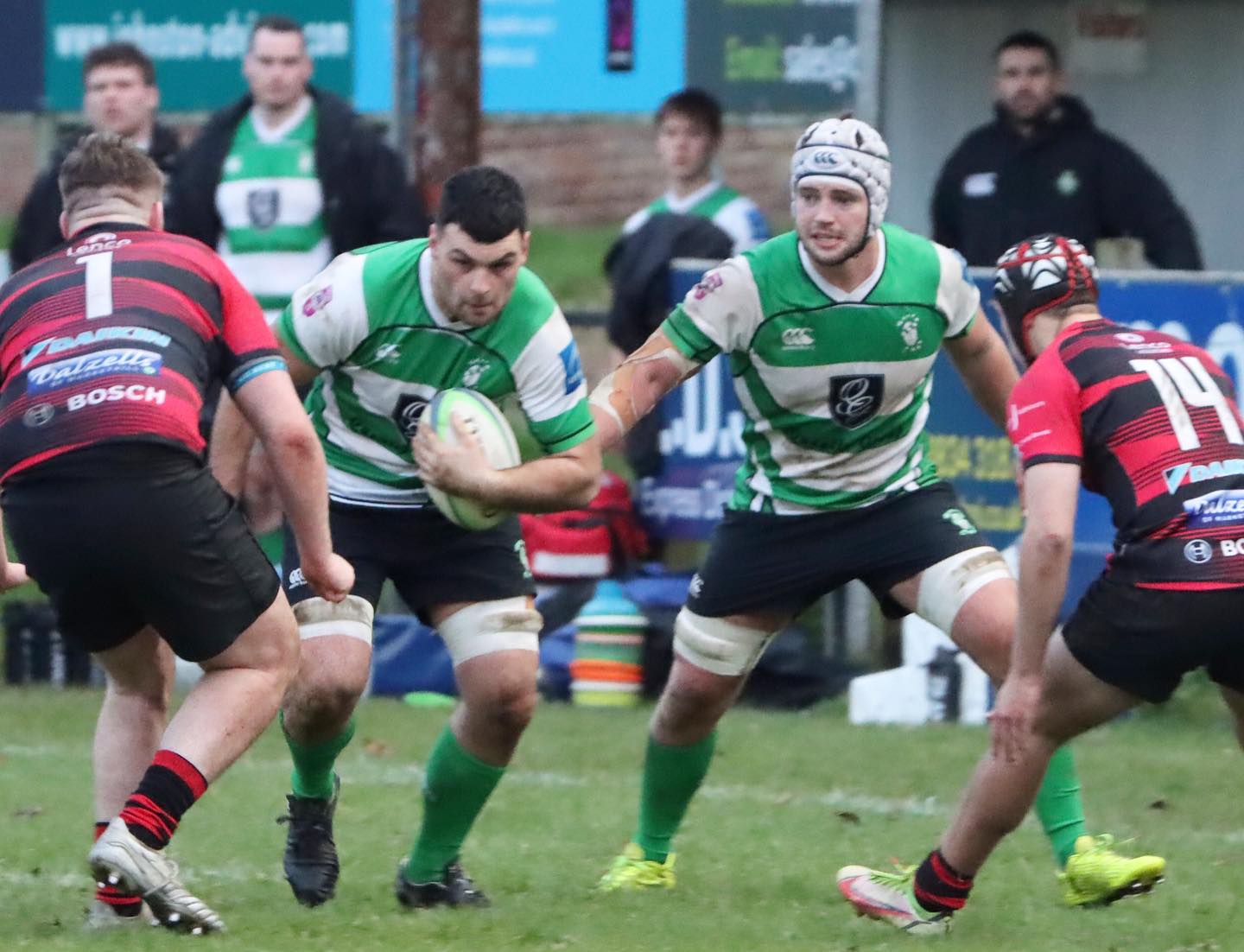 Armagh were now the dominant force and twice came close to adding to their tally in the next five minutes. Firstly, a brilliant intercept by Oscar Cawley prevented a certain score, and then Shea O’Brien knocked on with the line at his mercy. In addition, Naas were dealt a blow in this period when Peter King had to go off injured and Will O’Brien received a yellow card for handling in a ruck. On 26 minutes Armagh got the score which on the balance of play was well deserved. After driving Naas off their own scrum, Michael McDonald broke from the base of it, and his well-timed pass to Romain Morrow saw the latter sprint clear to score under the posts. McDonald added the conversion and Armagh led 14-3.

Naas responded after 27 minutes with a Sam Cahill penalty but were rocked by the concession of another try just four minutes later. Following a great offload by Josh McKinley in midfield, some slick passing by the Armagh backs created space out wide left for Dylan Nelson, and he raced clear to score in the corner. McDonald missed his difficult conversion attempt.

Naas were right back in the game after 34 minutes. Good play by the backs created a chance for Donal Conroy, but he was held up just short of the line. The visitors quickly recycled the ball and Armagh were then penalised for handling in a ruck, which led to John Glasgow receiving a yellow card. Naas opted for a scrum and quickly moved the ball into midfield where Charlie Sheridan sliced through the home defence for a fine score. Sam Cahill added the conversion to leave the score at 19-13 in favour of the home side. 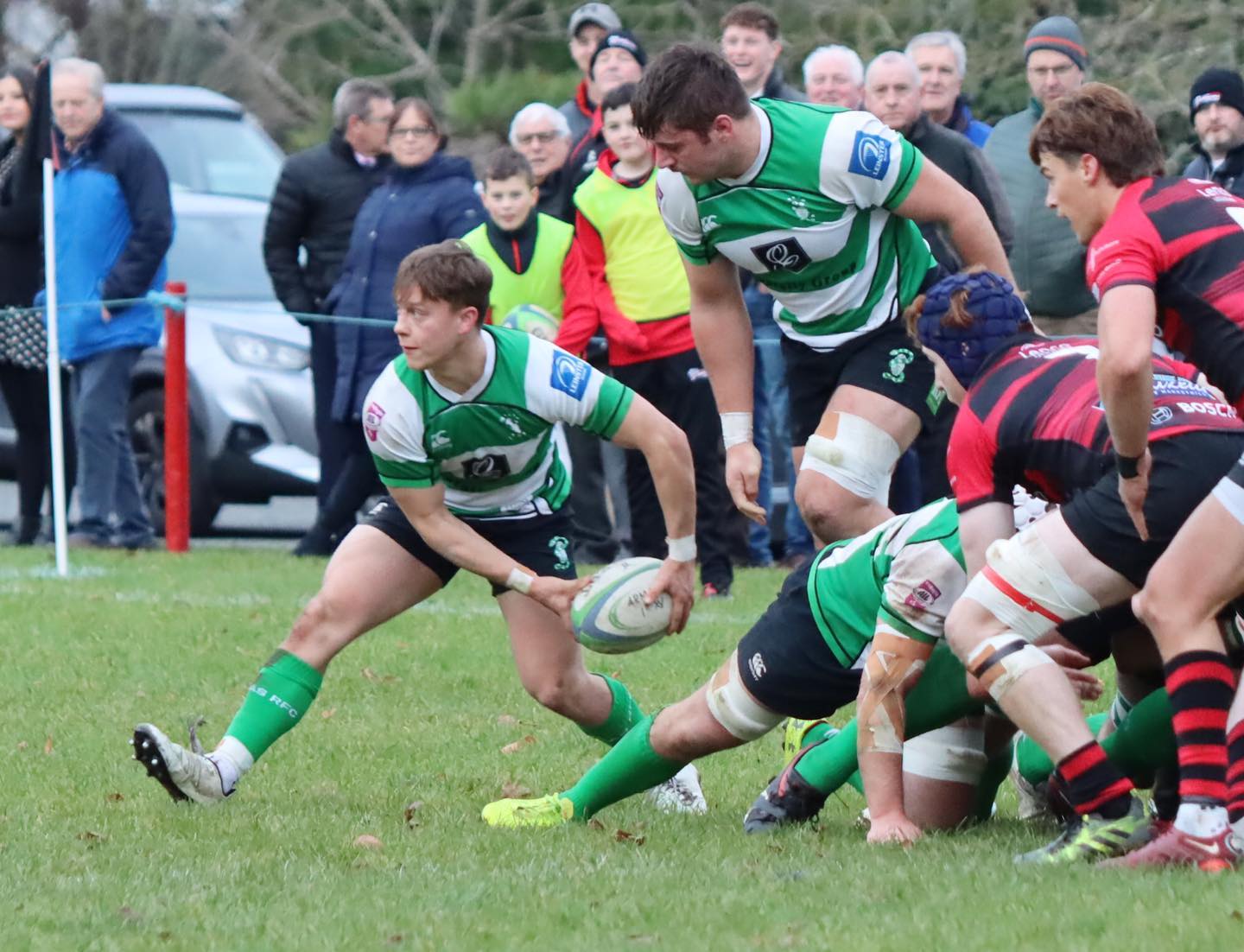 Naas certainly would have taken that as the half-time score, but unfortunately, they conceded just as the interval loomed. A superb tackle by Will O’Brien stopped Andrew Willis from scoring, but Armagh recycled the ball and went through the phases before referee Stuart Gaffikin penalised Naas for handling in a ruck and brandished a yellow card to Paul Monahan. Armagh opted to take a scrum, they drove the visitors right back before Neil Faloon picked up from the base of it to crash over. The conversion by Michael McDonald meant that Armagh led by 26-13 at the break.

Naas suffered a huge blow before the second half even started. Replacement prop Stephen Lackey was unable to continue, and this added to the loss of Peter King meant that Naas had no recognised prop for the second period. Hooker Conor Doyle went in as prop, but under the laws of the game Naas had to sacrifice a player for this, meaning that they had to play the last forty minutes a man down.

Within 90 seconds of the restart the home side took full advantage of their numerical superiority, when they quickly moved the ball wide left out to hooker Jack Treanor, and he made no mistake from close range, although McDonald missed the conversion.

The visitors had to reply quickly, and they did after 46 minutes. Armagh were attacking just outside the Naas 22, but Bryan Croke managed the intercept. He went on a lung busting run, the Armagh defence were unable to catch him, and he dived under the posts for a great score. Sam Cahill added the extras to make the score 31-20 in favour of Armagh. But just three minutes later a third try from Dylan Nelson effectively finished the game as a contest, as the conversion by Michael McDonald stretched the lead for the home side back out to 18 points at 38-20.

A yellow card for Armagh’s Josh McKinley after 65 minutes restored numerical parity at 14 players each, and within three minutes of this a Cillian Dempsey try which Sam Cahill converted reduced the margin. This gave the visitors the incentive that another try may secure them two points. It would secure a try scoring bonus point and if they held Armagh scoreless for the remainder of the game a losing bonus point would be gained as well. They threw everything at Armagh over the closing minutes and a brilliant break by Conor Doyle almost gained the elusive score, but it was not to be, and at the full-time whistle Armagh were victorious on a 38-27 score line. 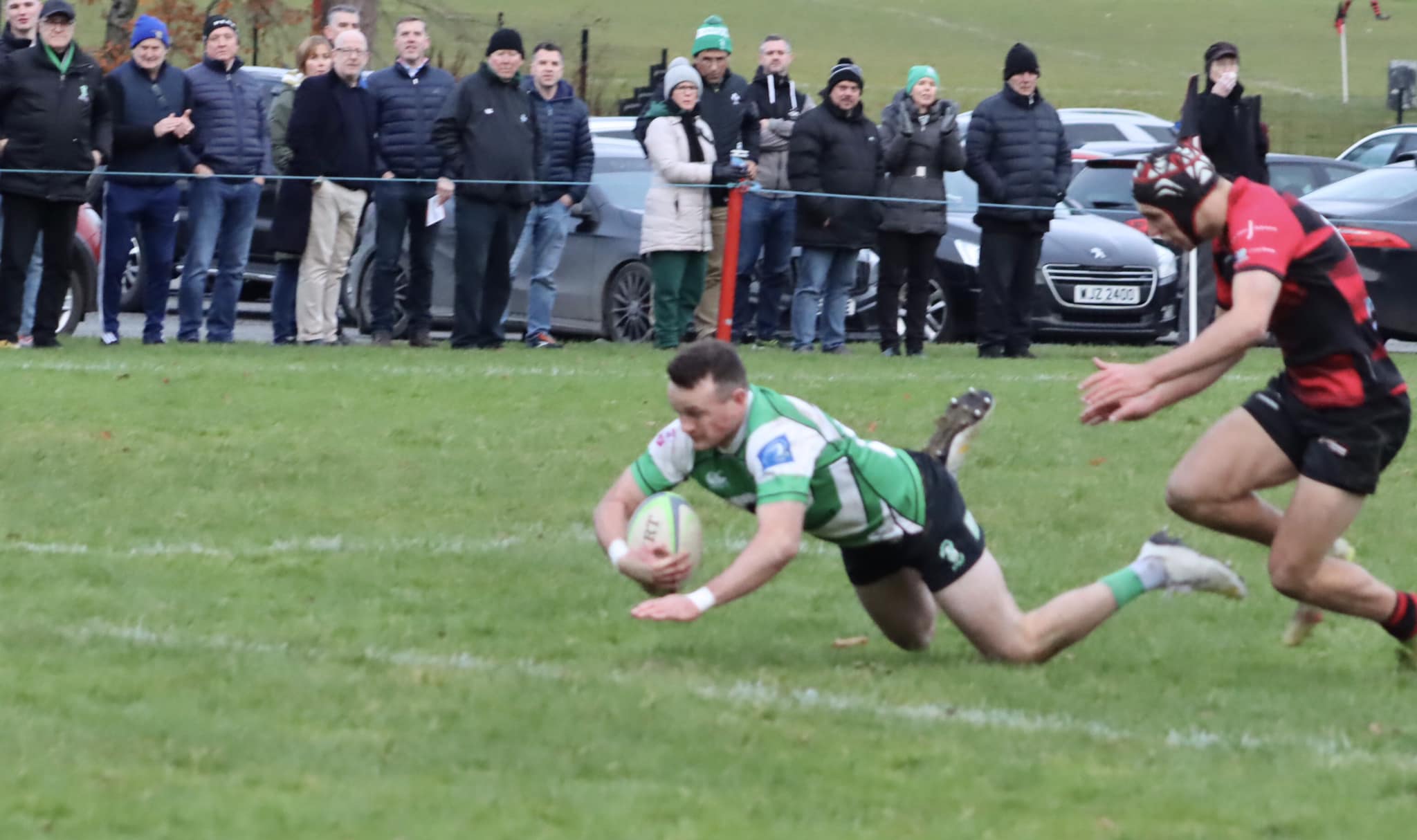 On the day there is no doubt that the better side won, but it was an afternoon that misfortune after misfortune be felled Naas, and a lot of credit must go to them for the way that they handled this and kept plugging away. Next up for them is a fixture against league leaders Buccaneers at home next Saturday afternoon. Kick-off is at 2.30pm and as always, all support will be greatly appreciated.