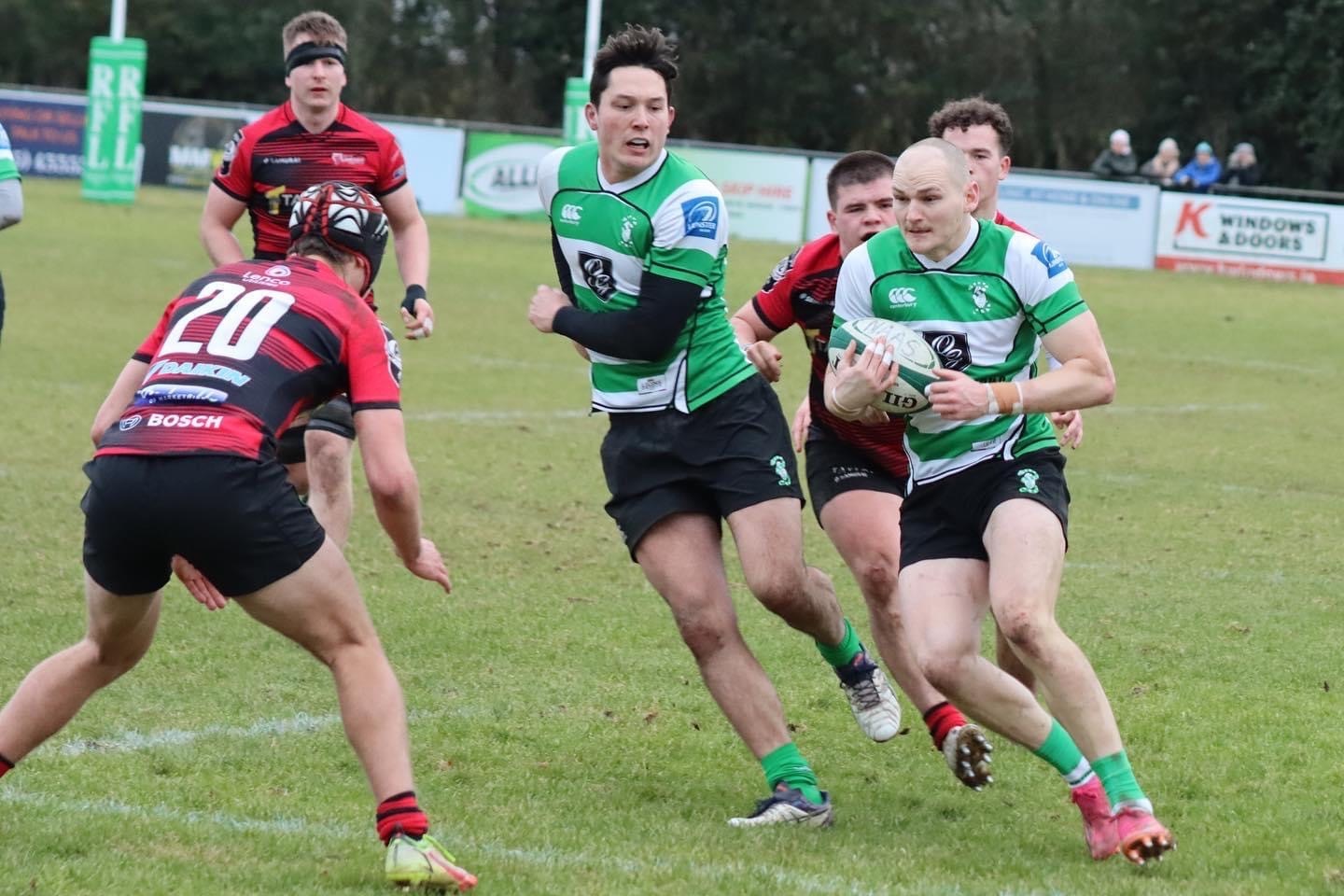 For the first time in 2023 Naas hosted an Energia All-Ireland League Division 1B fixture, when they entertained Armagh last Saturday afternoon. The home side knew a stern test awaited them, as in Armagh they were facing the form side of the division. You must go all the way back to last October for the last defeat that the Northern side suffered – in that time they have won six successive matches, a run that has propelled them to the top of the league alongside Buccaneers.

A driving wind blew straight down the pitch and Armagh had the benefit of the elements for the first-half, and they got off to a dream start by scoring within two minutes. A loose ball was hacked forward by James Crummie and Matthew Hooks was on hand to gather and race clear for a try. Shea O’Brien was successful with his conversion and the visitors were seven points in front. 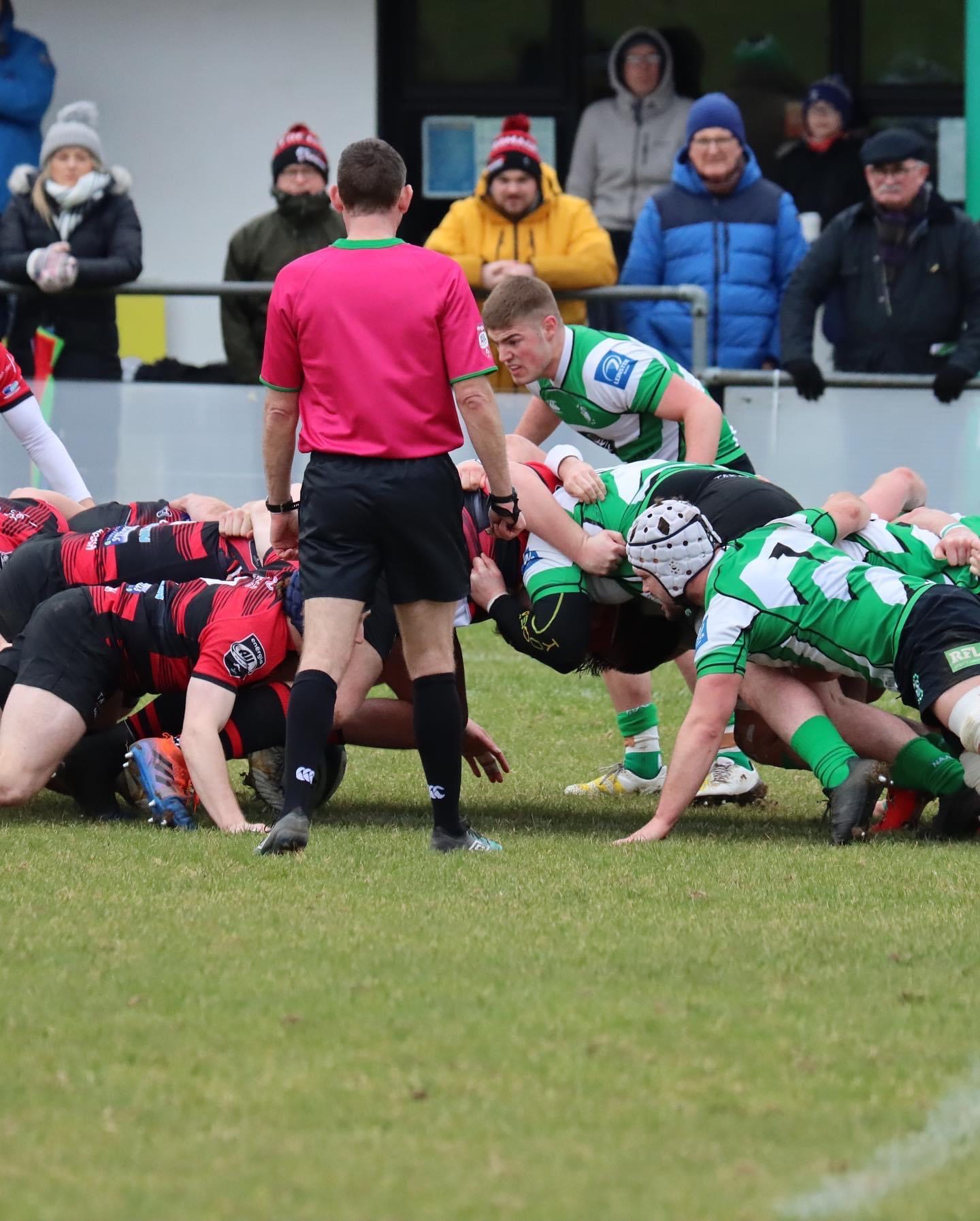 However, despite playing against a strong breeze Naas were the better side for the opening quarter. There was an aggression about their play and strong carries by their pack forced Armagh on the back foot. They should have scored after seven minutes, but they elected to turn down a shot at goal in front of the posts, opting to run the ball which unfortunately came to nothing. However, they were rewarded for their bright start with a fine try after 15 minutes.

From a line-out win by David Benn, the pack set up a driving maul which took them within ten metres of the Armagh line. The ball was then transferred to out-half Craig Ronaldson whose crossfield kick was superbly gathered by Fionn Higgins. The latter then passed inside to the waiting Mark McDermott who finished in style. Although Ronaldson missed the conversion Naas were right back in the game, trailing by seven points to five.

Armagh responded well and increased their lead after 23 minutes. After Naas were penalised for holding on in a ruck, the penalty was dispatched deep into the 22. The subsequent line-out was won by Josh McKinley, and after a series of pick and drives by the visitors’ pack, the ball was moved into midfield, where Shea O’Brien broke a couple of tackles to score beside the posts. He then converted this try to put his side 14-5 in front. 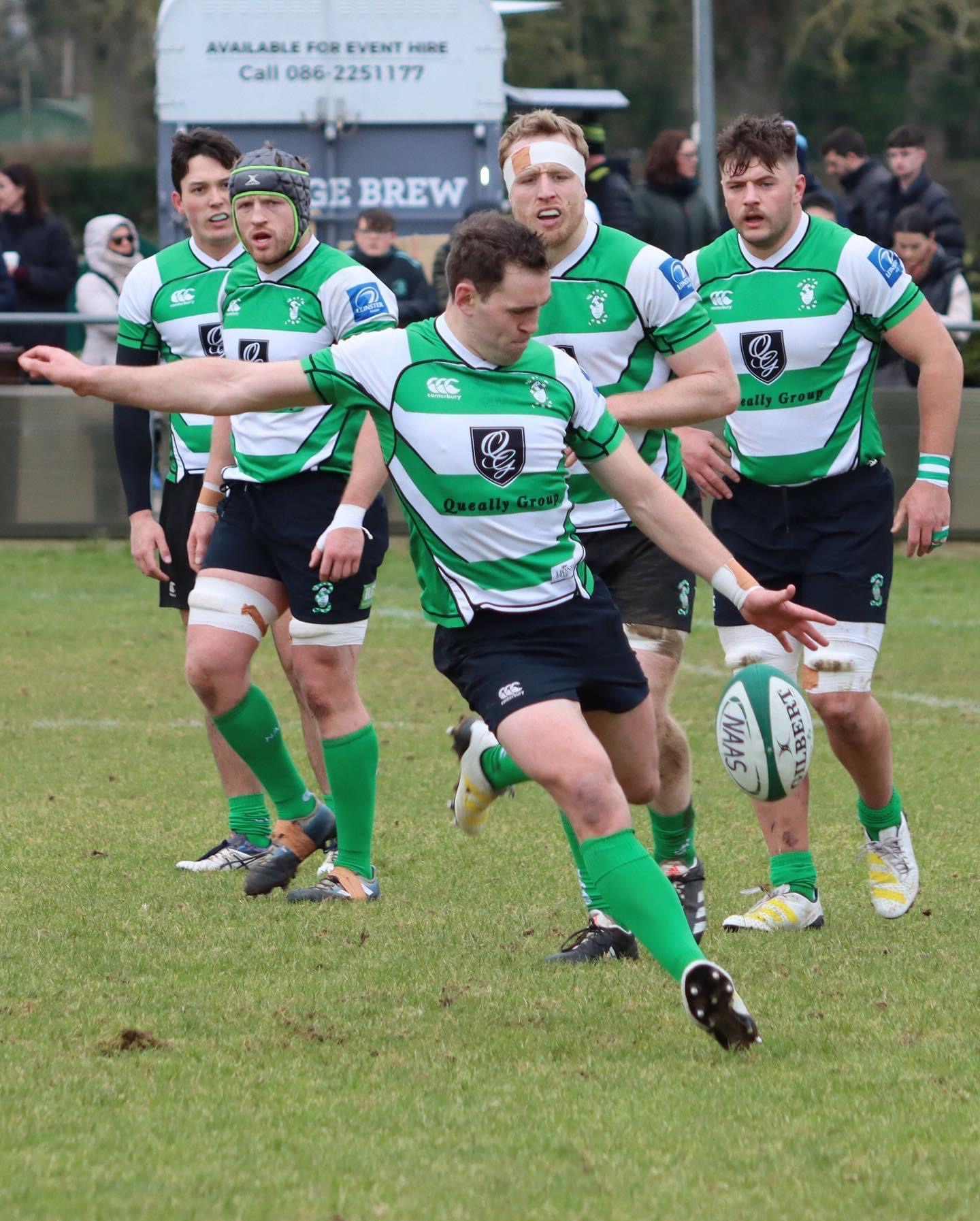 Straight from the restart Naas were hit by a body blow, which to be honest they never really recovered from. Armagh failed to deal with the kick, knocking on the ball in the process and Naas elected to play it. They quickly moved the ball across the back-line and just as referee George Clancy stated that the advantage was over, the Armagh winger Andy Willis intercepted and from 70 yards out sprinted clear for a try. Shea O’Brien missed the conversion, but was on target with a penalty attempt after 34 minutes, making the score 22-5 in favour of the visitors, which was to be the interval score. 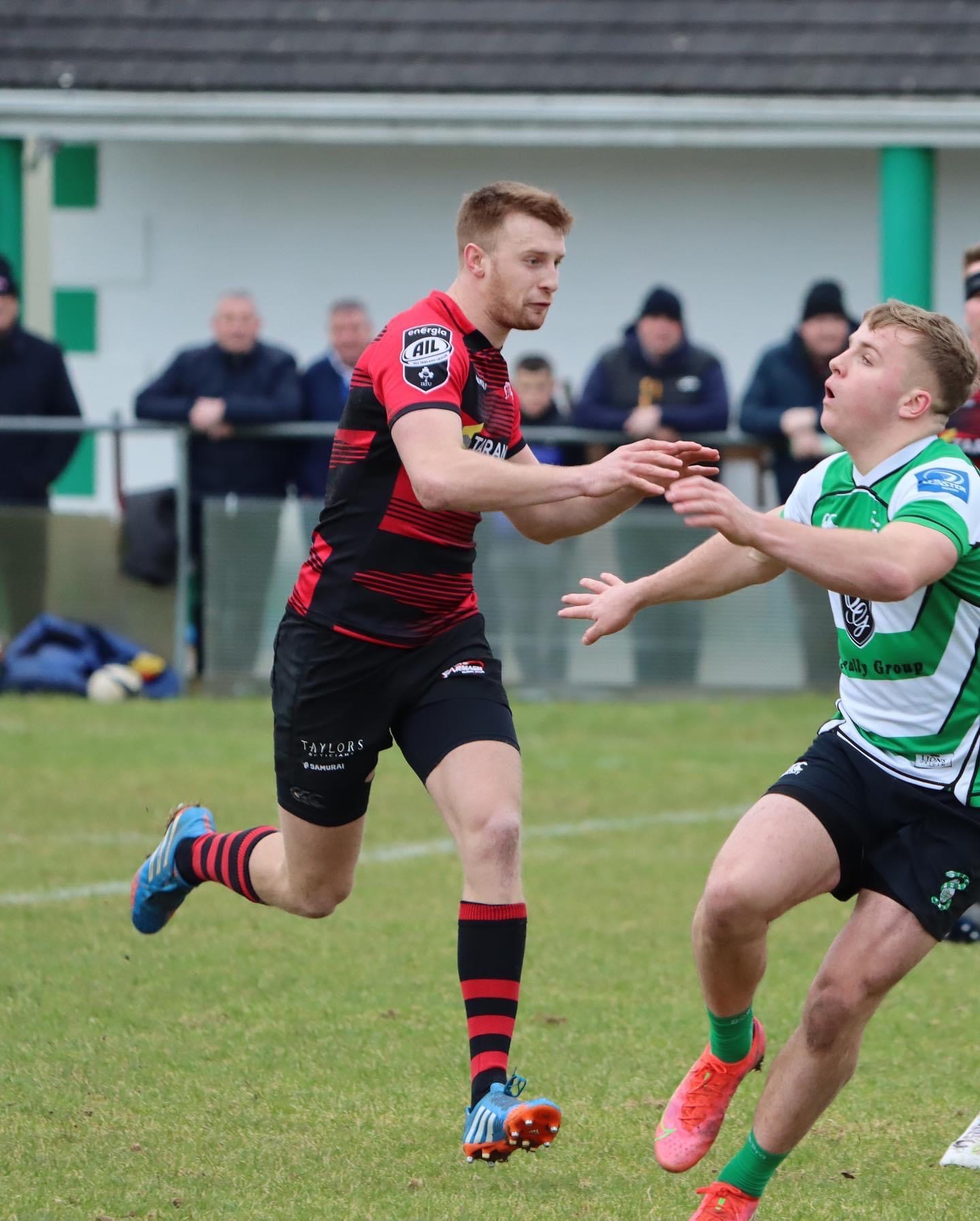 Naas needed a fast start to the second-half if they were to get back into contention, but they fell further behind within five minutes. The visitors quickly went on the attack and probed at the Naas defence before finding space out wide right, which Shea O’Brien exploited to the full, scoring in the corner. O’Brien’s conversion attempt was off the mark, but the lead had been extended to 27-5 and the game was effectively over as a contest.

Credit must go to the visitors. Their ball retention and ruck speed meant that a dramatic Naas fight-back was never on the cards, but credit must also go to the home side. Although it was not their day, they never stopped trying and kept going to the bitter end. However, it was Armagh who were to have the final say when with just two minutes remaining, a kick-ahead by Alex Johnston started a move that led to Ryan O’Neill scoring, to leave the final score 32-5 in favour of the visitors.

Not a good day for Naas, but they don’t have long to wait to get it out of the system, as next Saturday they are again at home, when they host Banbridge. Kick-off is at 2.30pm and as always all support will be greatly appreciated. 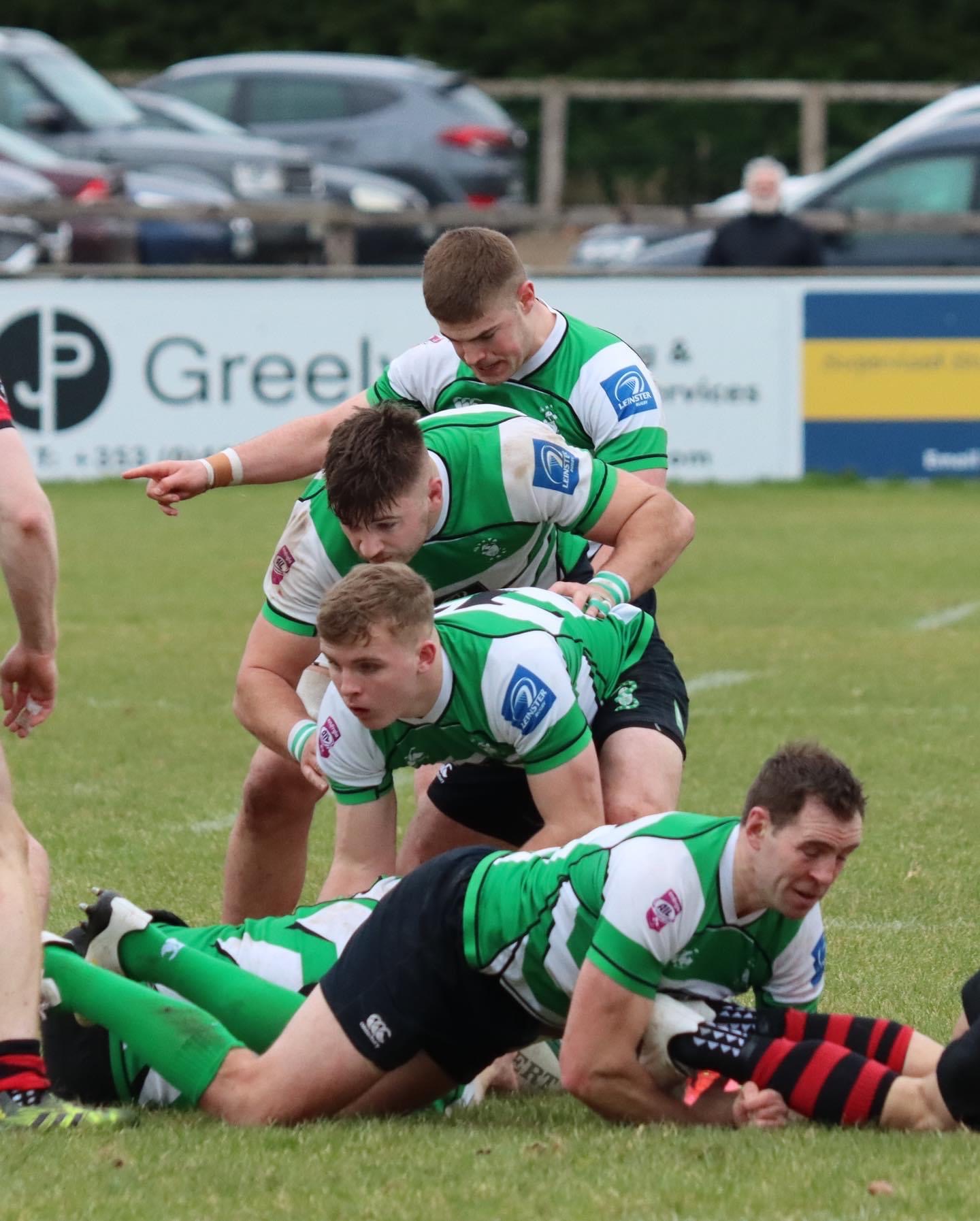 📷 Thanks to Naas Rugby Photos for the images