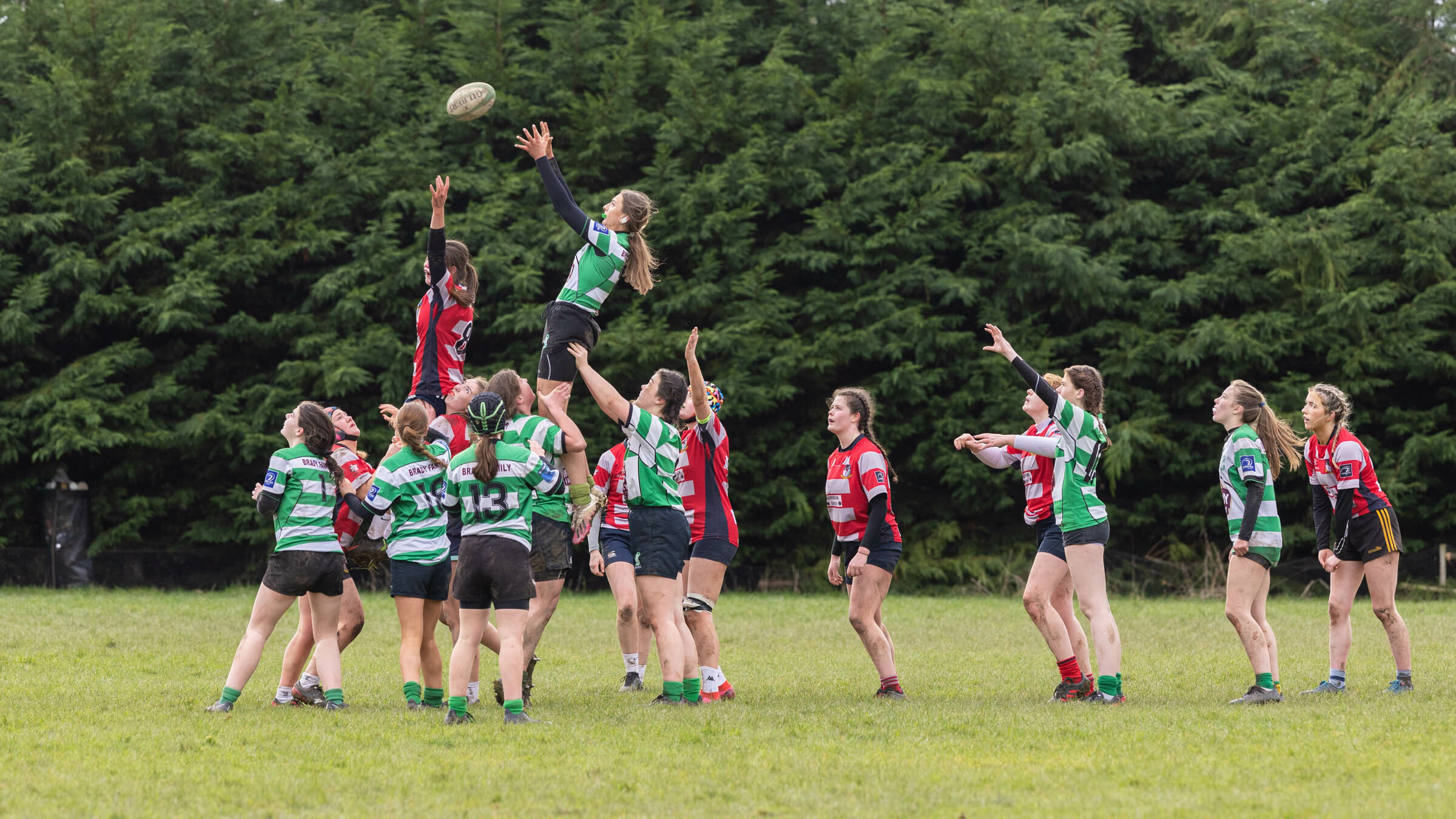 Naas women overcame the absence of several key forwards to beat Portlaoise in a very entertaining encounter in Laois. Naas now lie in third place in their first season in Leinster Division 2. Before the game, a minute’s silence was held as a mark of respect for Jack Mullen, whose sisters have formed the backbone of many Portlaoise girls’ and women’s teams over the years. Two of his sisters, including captain Rebecca, showed incredible strength of character by taking to the field to play for their club after a difficult week. 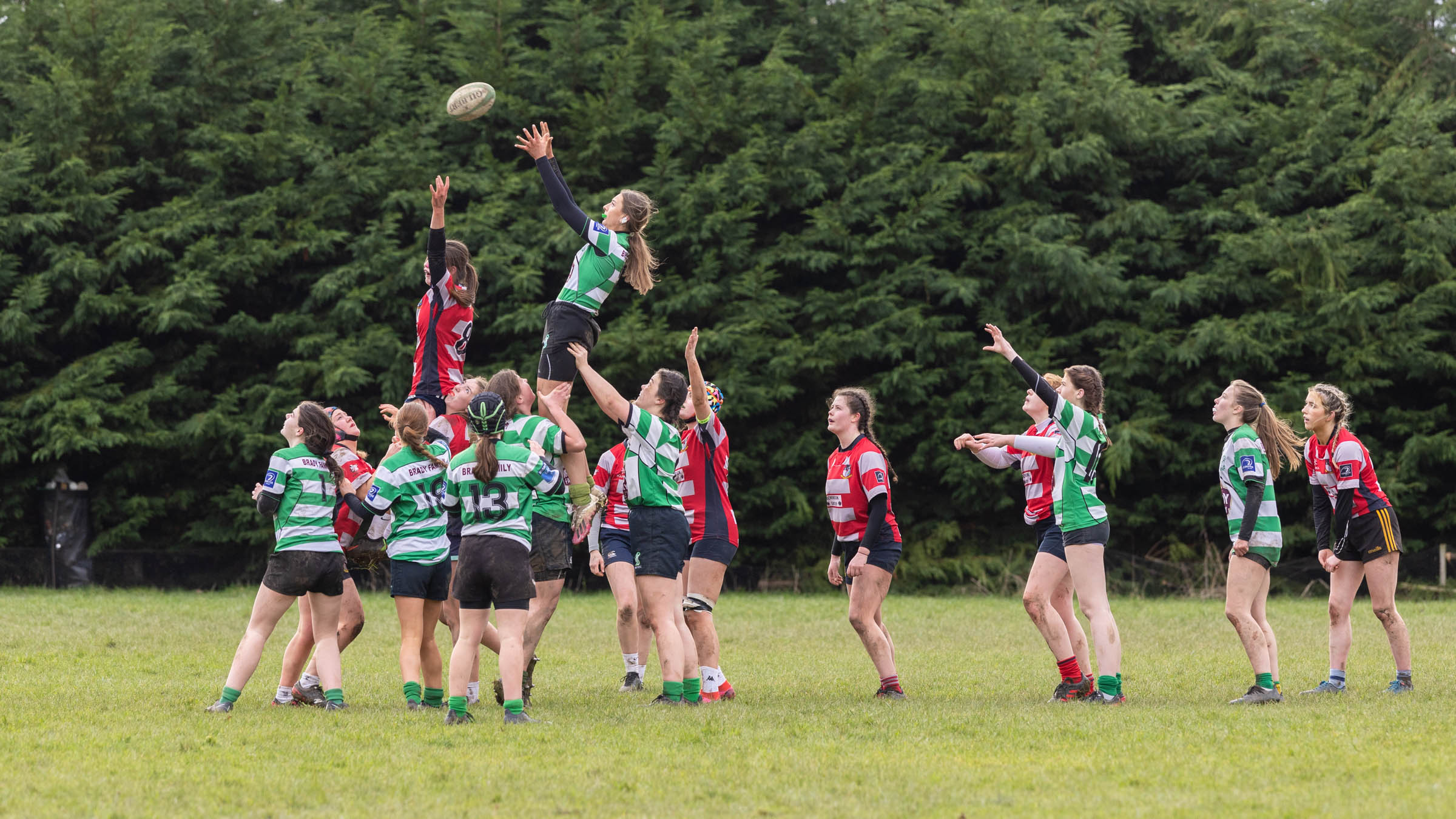 The game started well for Naas with winger Jamie Garland’s pace causing the Portlaoise defence lots of problems. However, any handling errors were severely punished by the dominant, very experienced Portlaoise scrum. The youthful Naas back line then started to grow in confidence, and a simple, fast series of passes eventually found flyer Rachel Naughton, who touched down in the corner for her first try for Naas. With regular kicker Clare Finn injured on the side-line, captain Aisling Mahon stepped up to take the conversion, but pushed the kick wide. 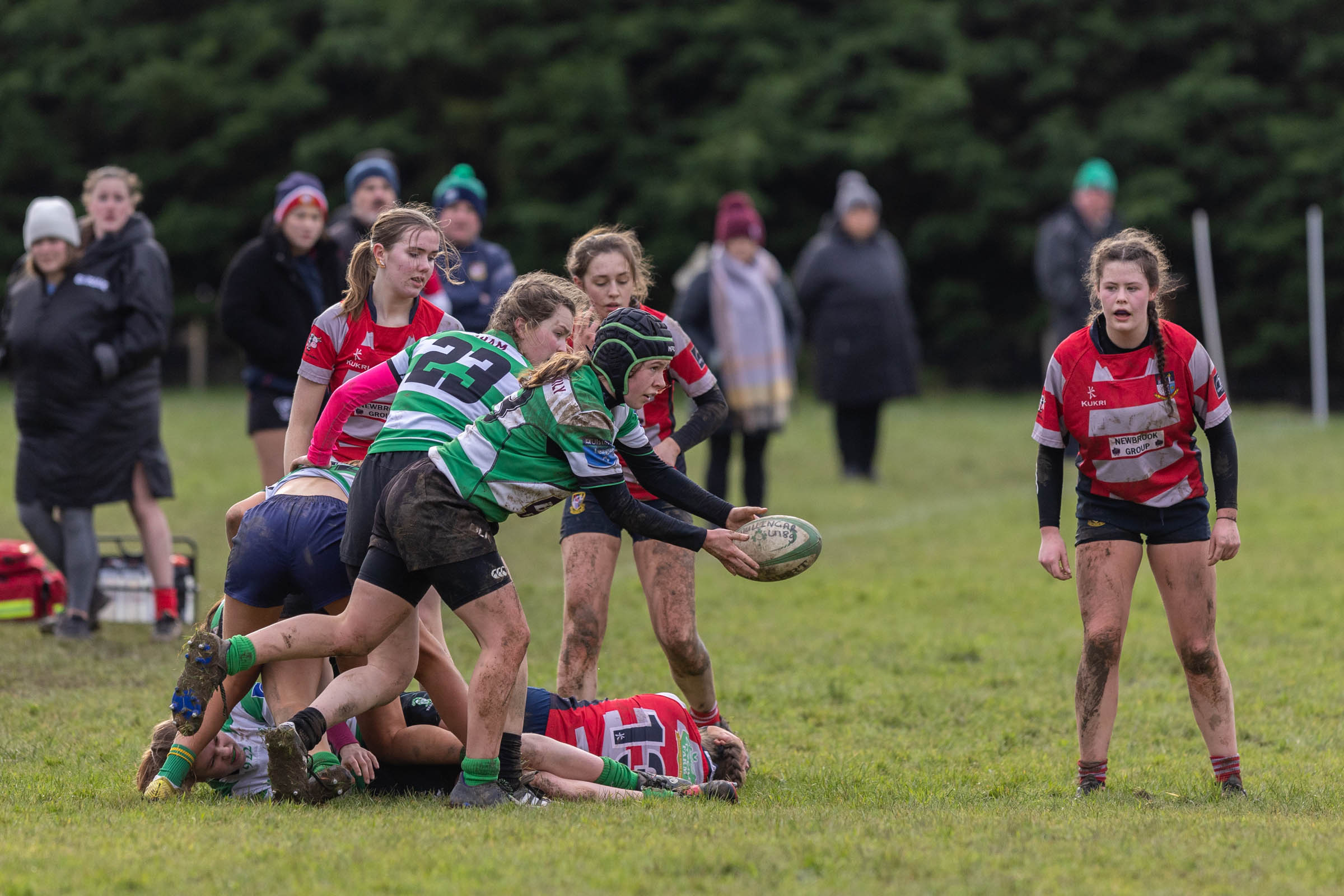 Portlaoise then applied serious pressure through their powerful forwards to hold Naas on their own line for ten minutes. The Naas women resisted the pressure really well, forcing a knock-on right on the 22. A great clearance kick from Sheena Hubbard, whose kicking game is improving every week, was chased by speedster Garland, pushing Portlaoise deep into their own half. However, the Laois team then fought their way back up the field, and a series of short-range bursts eventually led to a score from a metre out by powerful, veteran prop Rosie Palmer. After a failed conversion, the score stood at five all. 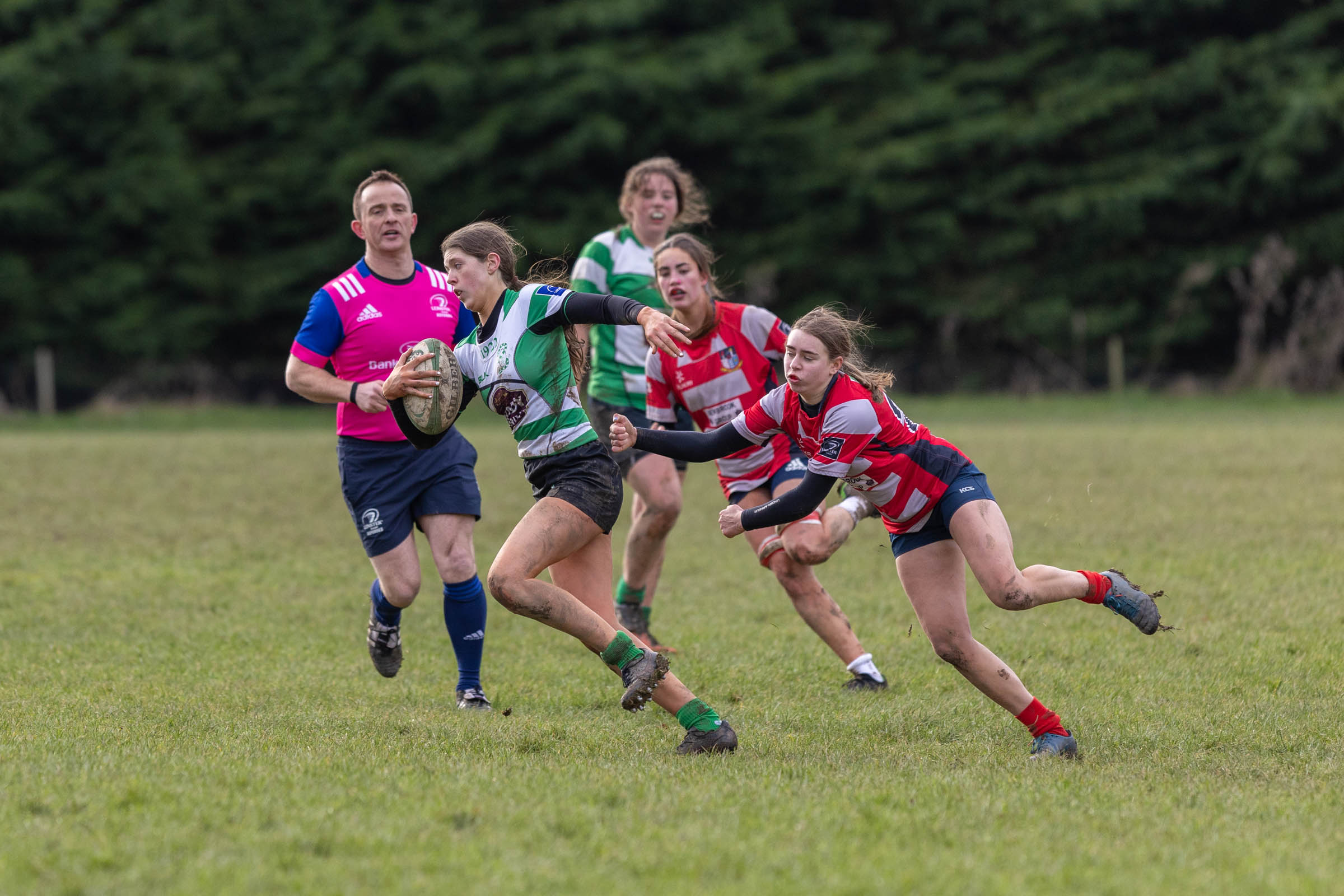 Just before half-time, Garland and full-back Zoe Dunbar followed up on another penetrating kick from Hubbard. The Naas pack recycled the ball really quickly and then Hubbard herself crashed over for a try, making the score 5 10 to Naas on the stroke of half-time. 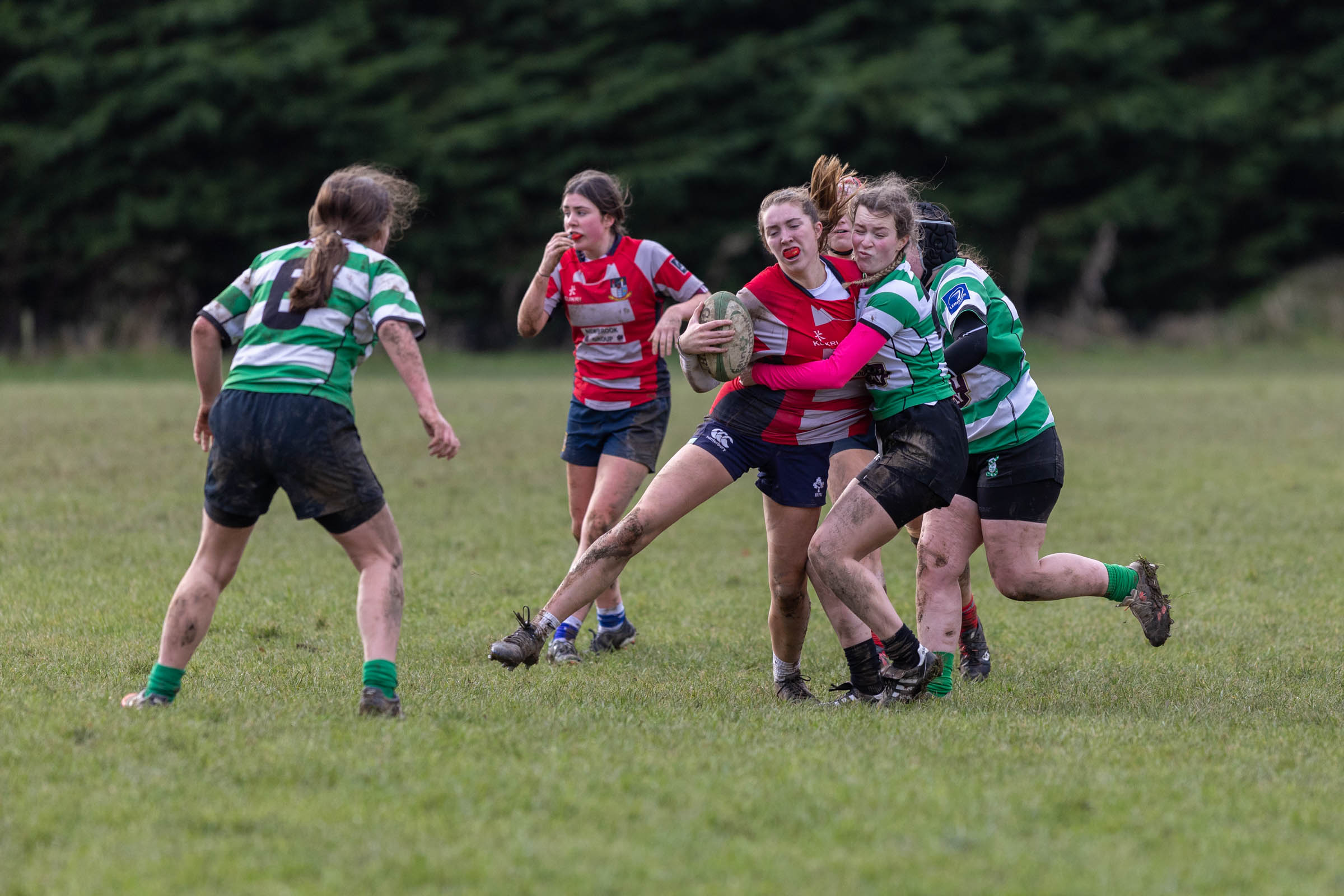 In the second half, Naas continued this highly successful game plan, which was now even more effective with the moderate wind at their backs. 18-year-old Emma Tully came on for her debut for the women’s team and immediately hit a ruck with power and perfect technique to take all the momentum out a threatening Portlaoise attack. The introduction of Tully meant that the Naas front-row consisted of two 18-year-olds and a 20-year-old, all of whom have come through the Naas girls’ system. 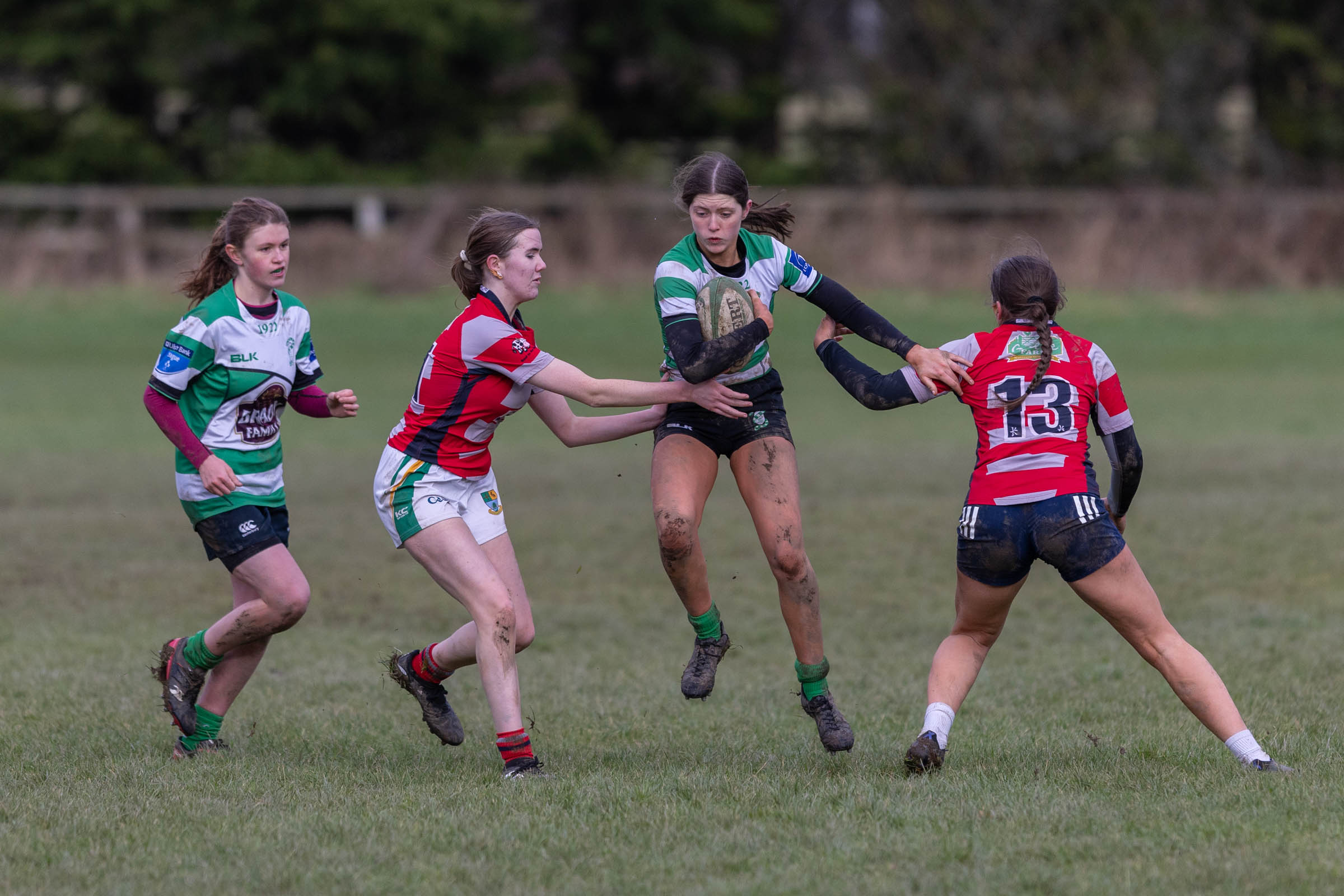 Naas had all the territory and possession, but difficulties in the scrum and a failing lineout meant they were not able to extend their lead. However, their superior speed around the pitch eventually won a turnover, which Dunbar then hammered down the field with Aoife Furlong in pursuit. Furlong tackled the Portlaoise fullback on halfway, Naas turned over possession at the ensuing ruck and then Ali Miley rounded off a very assured overall performance with an unstoppable 40-metre run for an impressive team try. This left the score 5 15 to Naas, with 15 minutes left to play. 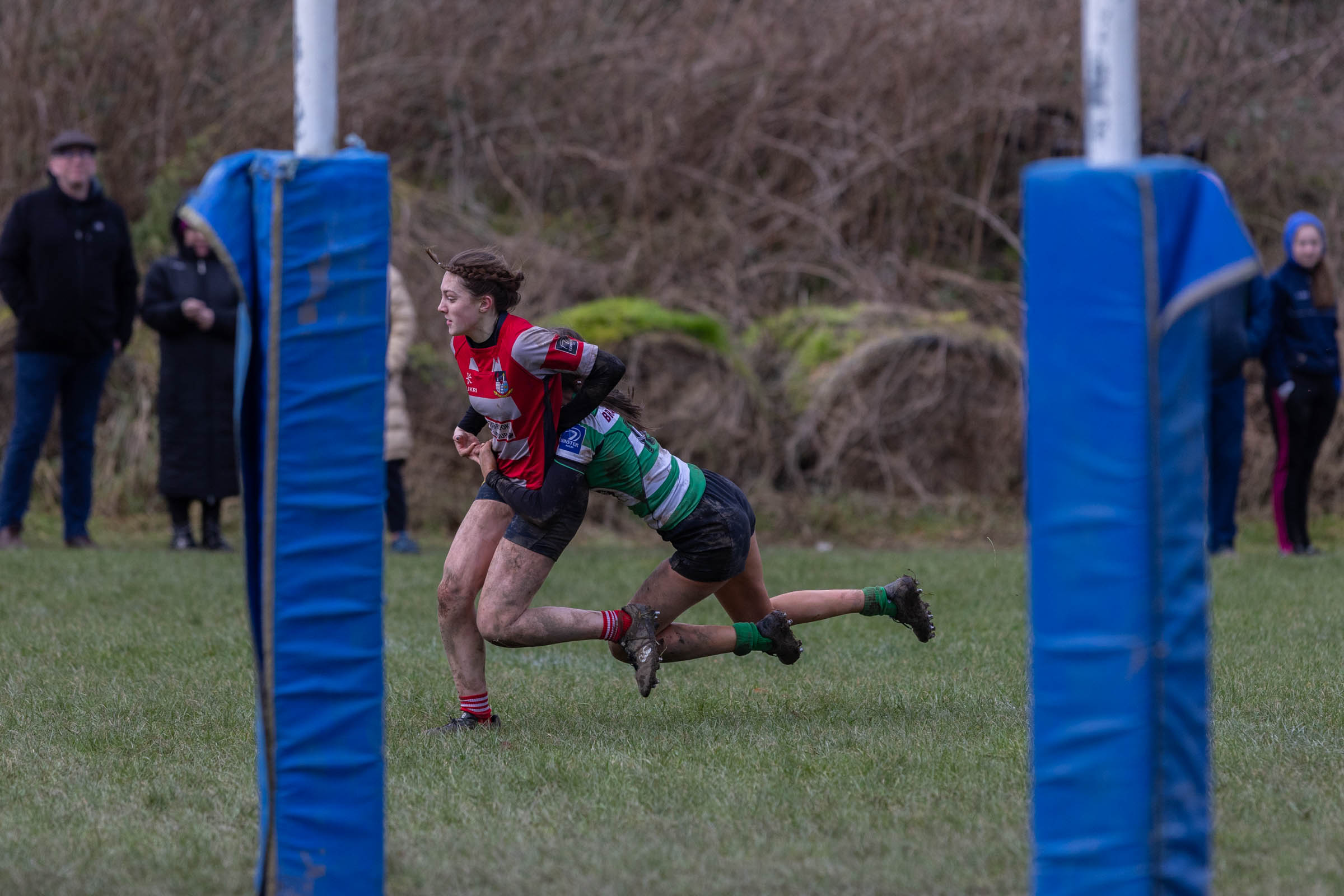 Naas were unlucky not to claim the try bonus point a few minutes later after a superb run by the barnstorming Katie Halpin and a weaving run by the mercurial Dunbar, who forced her way to the try line. Unfortunately, referee Miskin felt she hadn’t grounded the ball properly. Clever, forceful play from the Naas women held Portlaoise on their line and forced a knock-on in mid-field. Scrum-half Ciara Mckeown broke from the scrum that followed, beat her opposite number and fed the ever-present Mahon who romped home with characteristic athleticism for the final score of the game. 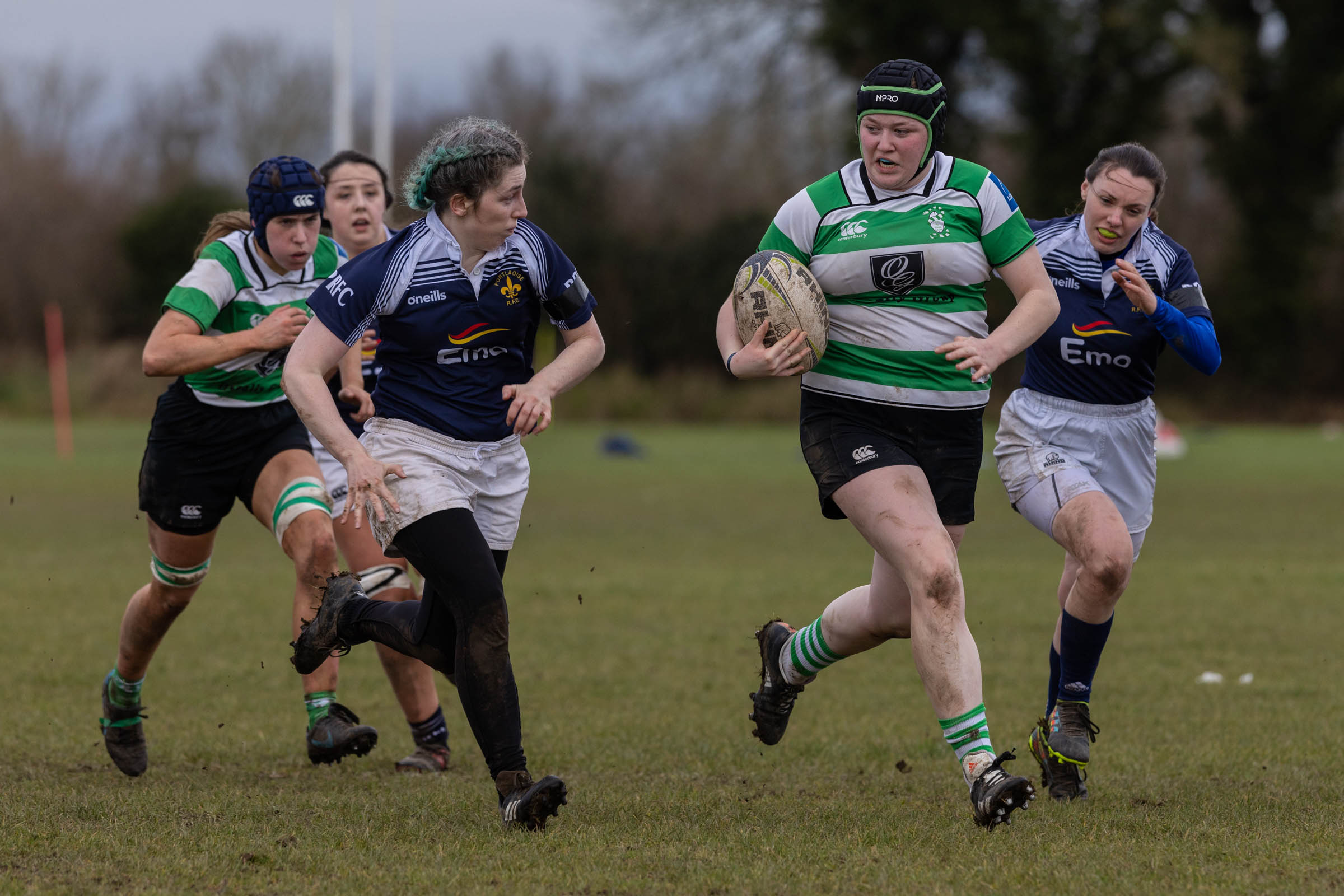 To their credit, Portlaoise threw everything at Naas in the last two minutes, but the Naas women held out to win the match by 20 points to 5. 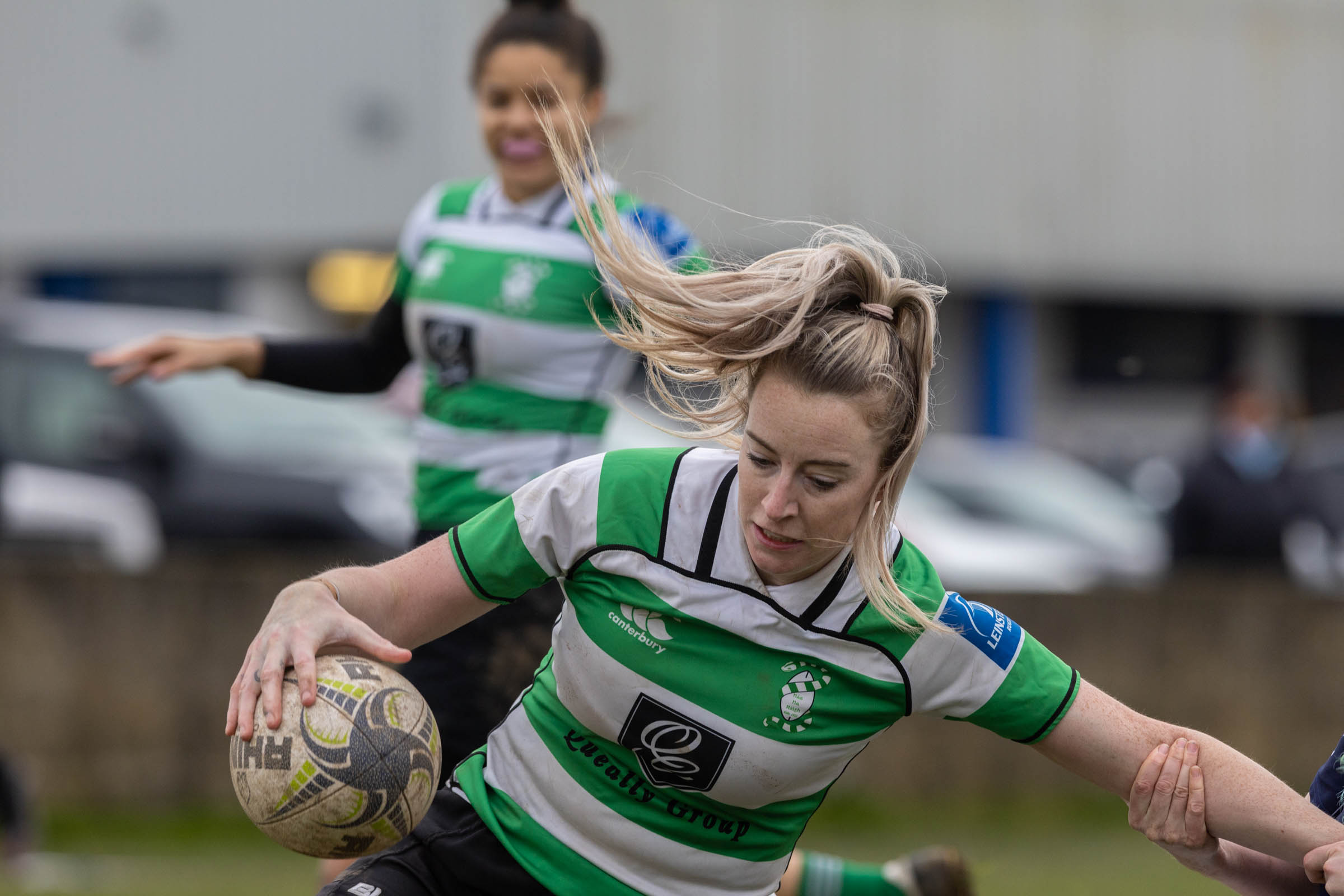 After a tough loss last week, the Naas coaches will be delighted with a bonus point win, and also the style of play this group of players is starting to develop. The women now have a week off before the return match against Portlaoise at Forenaughts on Sunday 5th February. 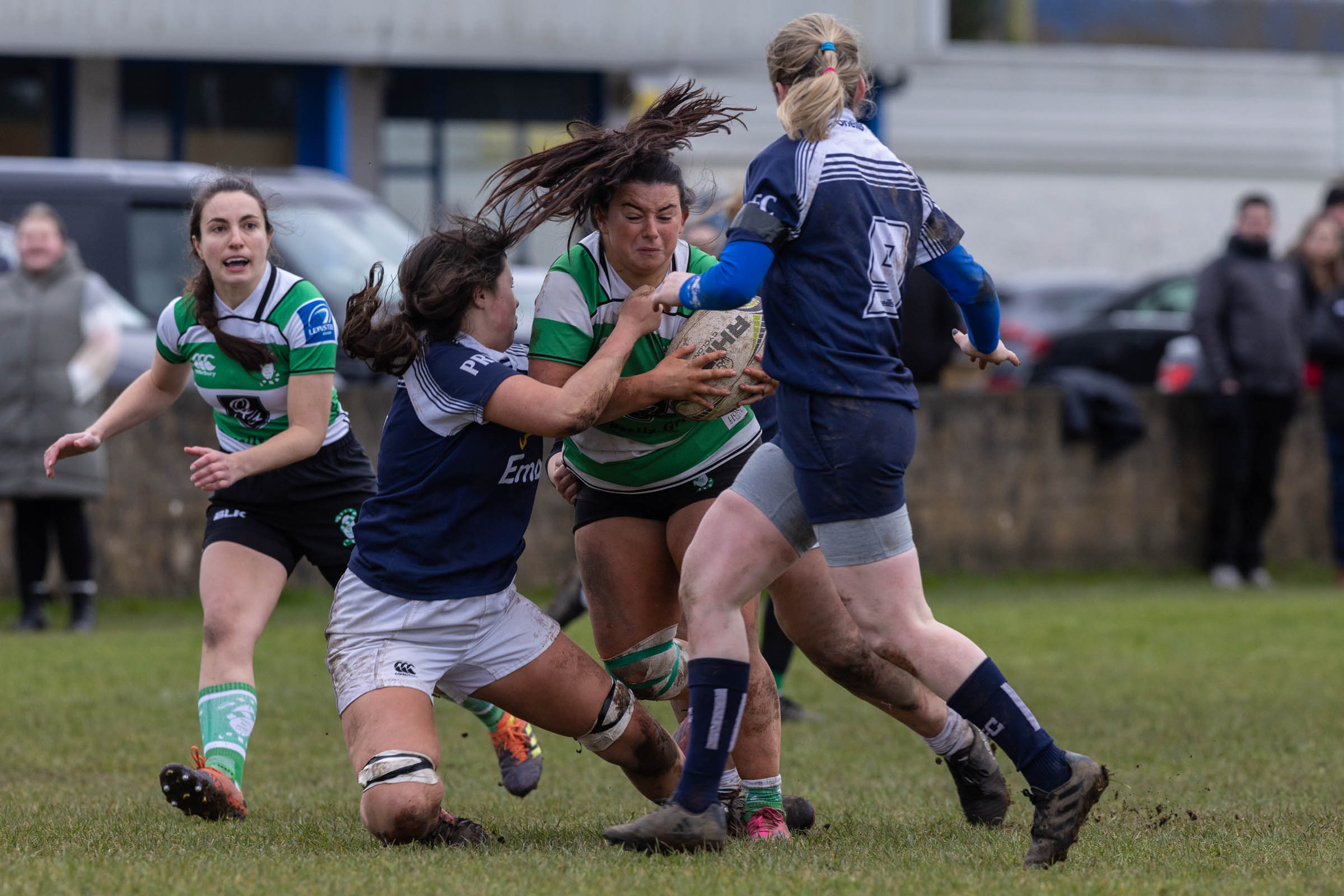 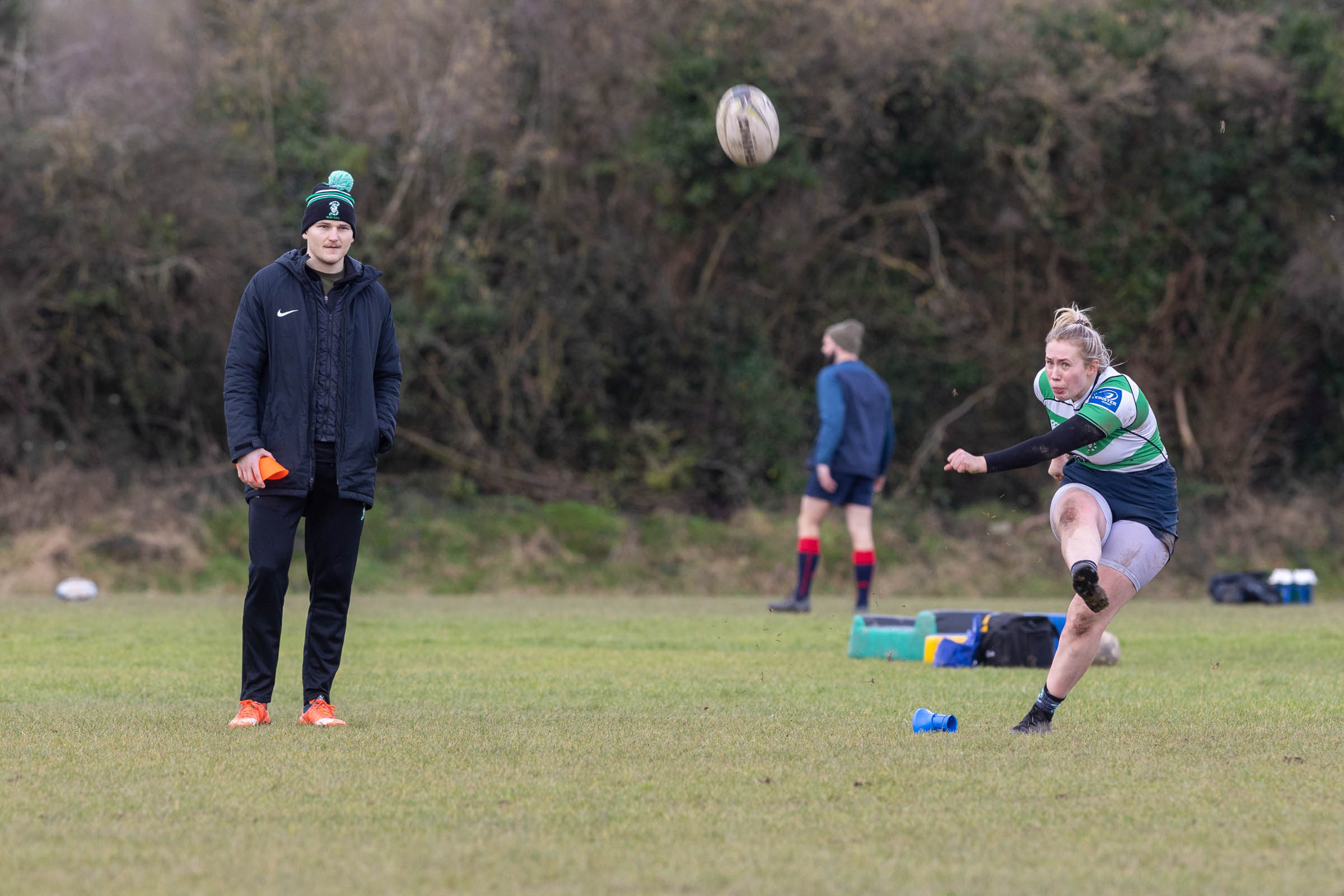